The NFB at HotDocs: Wiebo's War

on May 01, 2011
Wiebo's War
a film by David York
presented by the National Film Board of Canada

Wiebo's war sheds an intimate light - or as intimate as possible - on one of the more controversial figure in recent Canadian history. Wiebo Ludwig, patriarch, religious leader and environmentalist, has also been convicted of offenses related to the bombings of oil wells in Alberta's Peace River area.If you're like

me, you'll probably remember him best from the national media coverage following the 1999 shooting death of a 16 year old girl on his farm.

The film begins in January 2010, as filmmaker David York drives up the long road to the Ludwig farm at Trickle Creek, some 800 km north of Calgary. He finds the drive clogged with police vehicles as some 200 heavily armed police descend on the property. They've come to search it for evidence of a string of oil patch bombings that go back to 2008, and Wiebo is already in custody, having been lured to a meeting of government officials that turned out to be the RCMP.

Fade out, and we're back in 2008 and the documentary's prickly beginnings. David arrives at the farm to be questioned by Reverend Wiebo and a son about his suitability for the task - given that the filmmaker is an avowed atheist.

That hurdle overwith, the film begins its portrayal of the extended-extended family group that makes their home on the property. The religious community began with 2 couples - Wiebo, wife and another unrelated couple - and their collective 11 children some 25 years ago. Over the years 3 daughters of 1 family married 3 sons of the other, along with other marriages and a slew of grandchildren added to their numbers. Along the way they became a virtually self sufficient community - energy and food production included. They were off the grid long before it was fashionable, and their belief system led to an isolationist lifestyle. 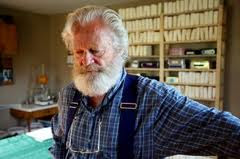 "We had some sense that we wanted to be very different," Wiebe says, adding, "We wanted to be alone." It led to an atmosphere of resentment with the nearby town long before the 1999 shooting.

As shooting progresses, the film becomes part of the present. The gasline explosions begin again as the documentary starts to film - David thought he was coming long after the fact, instead he's thrown right inside another story. He wonders about the bombings as the clan all gather around the TV to watch the news about the explosion - and the RCMP soon follow with a visit.

The film blends Wiebo's narration with filmmaker's voice, archival footage and screens full of the sylvan Alberta beauty - now punctuated by the gas spewing oil wells. The documentary flits back and forth between the present of the shooting and archival footage from the decades old incidents as the details of the whole story unfold. It does succeed in giving us the real flavour of these people, including Wiebo's sometimes too self satisfied certainty of his conviction. They're all articulate, well spoken, calm - even in the face of the awful tragedies they have faced, and the ongoing friction with both the town and the RCMP.

It turns out their farm is on one of the largest undeveloped natural gas deposits. One day, they were contacted by oil industry representatives who simply told them that they were going to set up a gas well on their property. Unbeknownst to them, they only owned the top 6" of their land - the provincial government owns all the mineral rights and can sell them out from under you without notice and without much compensation - landowners only receive a few thousand for each well.

The well goes up just north of their property and things begin to happen. Livestock die without warning or explanation, and sheep begin to abort. Then tragedy strikes when Wiebo's own wife miscarries - the first of 5 miscarriages and stillbirths in the family. Then they receive word the oilwell is spewing "sour gas" or toxic hydrogen sulfide. Twice they had to evacuate the farm because of leaks. "They'd tell us to tape up the windows," one of them remembers. Children's eyes red and swollen from exposure to water in their own rain barrels, and the taps run water you can light up with a flame. The first set of bombings begin, and tensions with the town - where the oil companies are now the largest employer - rise. 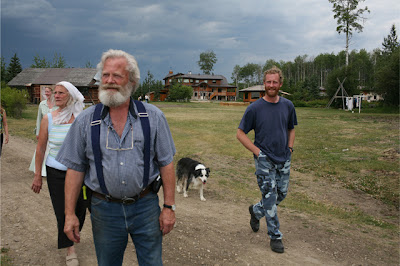 Wiebo is charged in the bombings, and on a court date in Edmonton, his own vehicle is bombed, with he and his wife just steps away. Then two truckloads of local teens ride up to the farm and noisily onto the property at Trickle Creek not once but twice, and leave with teenager Carmen Willis dead and another boy injured. There are no charges laid in those incidents, but Wiebo is sentenced to 28 months in prison for bombing related charges.

It comes back to the present of the film, with Wiebe released and no charges laid in 2010. Wiebo can seem self serving, and is at his most obfuscating in discussing his lack of responsibility in the shooting death. Far more convincing, however, are the younger members of the group as they describe cowering on the floor in fear as the trucks drive noisily onto their property. These are not wide eyed fanatics, but articulate young women probably similar in age to the marauding teenagers.

The film really makes no attempt to plead Wiebo's innocence. The group tried for 5 years to get government at any level and the RCMP to take notice of their plight and got no response. Wiebo speaks of "dealing with the enemy" and states openly, "When he kills your children, kills your animals, you realize it's war."

Back to 2010, the group get news of possible water contamination from the nearby well  the women go to set up camp nearby. They send press releases, but no one is there as they protest the flaring of the well and the war goes on...

You may not leave convinced of anyone's innocence, but you will leave knowing far more about the group and their situation than you ever would have by watching the news.