Curiously, New York Gallery Week was only 3 days long, but in any case, I myself decided to drop in for a round of openings on 26th Street in Chelsea on the Friday night. The following come from my scribbled notes - and most of the shows continue to at least the end of the month if you want to check them out for yourself.

A Painting Show at Harris Lieberman (508 West 26th Street)
It certainly is a painting show, and I'll just note in passing that the champagne was long gone when I showed up at 6:30. It's contemporary art in all its permutations, some abstract, some figurative, and none of them credited other than with a few handouts that contained tiny photocopied pics of some of the works. My favourites were an evocative black and white duo, one with a guy lighting a smoke, and some of the abstracts, although I have no idea who the artists were. 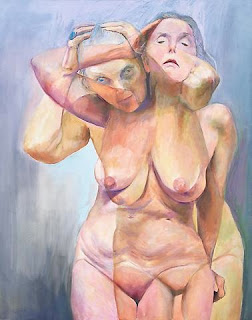 I.D.E. A. Squad: Innovative Design in Emerging Advertising at Rogue Space (526 W 26 street, suite 9E)
This show featured the work of graduating students in the advertising program at F.I.T., some of the most interesting work I saw all evening and free flowing vino along with tables laden with lots of goodies to eat. Of course that didn't influence my opinion, but I was really struck by their sheer creativity. Stand outs for me included Natasha Holderied's mock ad for Morningstar Farms, featuring a piggy stripper and "our bacon strips will keep you sexy" tagline, along with the work of Kenneth Garcia. 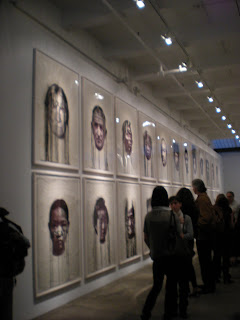 ANONYMOUS - Jaume Plensa at Galérie Lelong (528 West 26th Street)
You can see one of Jaume's sculptures, the 44 foot high Echo, at Madison Square Park (one of my favourite downtown parks btw) until August 14. His work combines classical and contemporary sensibilities, and this show included portraits on paper. Their subjects were drawn from a very multiracial mix, and are somewhat obscured by dripping paint and other contrivances. A room full of them has a very stark kind of effect (see image) and if you're in Calgary, he's currently working on a piece for The Bow building, set to open in 2012. Vino or mineral water were my rather elegant choices here.

I Am Still What I Wanted to Be - Rik Meijers at Friedman Bnda (515 West 26th Street)
Rik Meijers is also a well known post-punk musician in his native Holland, and in that spirit, the Stella and Grolsch were accompanied by appropriate music by Jeffrey Lewis and Chomain Vasser and friends. I liked Rik's collage paintings, most of them using feathers mired in paint and other objects (like the corks that make up the knives in Wounded Man) in their depiction of fringy, post-punky characters.The feathers give many a wolfmannish effect, and there was a definite theme of beer (beer caps, shards of beer bottles, et cetera) in evidence. It was fun and interesting.

Leon Kossoff at Mitchell-Innes & Nash (534 West 26th)
He's considered one of Great Britain's finest living artists, right up there with Lucian Freud, and a large room full of his earthy toned canvasses has a kind of moody effect, with faces and landscapes that melt in and out of the backgrounds like images reflected on water. My favourite is one of a cathedral - you can see it in the video clip below when the reclusive artist talks about one of his shows in London.