Opening Night film The Salt of Life, and a special screening of Alessandro Blasetti’s 1860 set for the series’ 11th edition

New York, NY - The Film Society of Lincoln Center announced the details for the upcoming film series, Open Roads: New Italian Cinema which will screen at the Walter Reade Theater June 1 - 8.  This year, the 11th edition of this popular showcase will open with the US Premiere of The Salt of Life, director Gianni Di Gregorio’s warm and witty follow-up to his 2010 sleeper hit Mid-August Lunch.  With Salt of Life, writer-director-actor Di Gregorio has created another sparkling comic ode to the ladies in his life. He will appear in person with the film on June 1.

Commemorating the 150th anniversary of the Risorgimento—the movement that created modern Italy from a group of disparate states—Open Roads: New Italian Cinema is proud to present the premiere of Mario Martone’s We Believed, an epic reconstruction and re-imagination of the social and political forces that led to Italian independence. Faithful followers of Open Roads will also find a number of favorite directors from the past—among them, Sergio Castellitto, Roberta Torre, Gabriele Salvatores and Andrea Molaioli.  Also part of Open Roads this year is a rare screening of 1860, Alessandro Blassetti’s 1934 epic of the Risorgimento that follows a group of peasants on their road to joining Garibaldi.

Other highlights include the U.S. Premiere for Giulio Manfredonia’s Whatsoeverly; and conversations after the screenings with the directors: Gianni Di Gregorio (The Salt of Life), Luca Lucini (The Woman of My Life), Roberta Torre (Lost Kisses), Alessandro D’Alatri (On the Sea), Mario Martone (We Believed), Carlo Mazzacurati (The Passion), Lucio Pellegrini (Children of the Stars), Giovanna Taviani (Return to the Aeolian Islands), Giorgia Cecere (The First Assignment), and the actor Antonio Albanese (Whatsoeverly).

According to the Film Society of Lincoln Center Program Director Richard Peña, “With a strong presence at the upcoming Cannes Film Festival, this will be another banner year for the new Italian cinema. Many artists we introduced through Open Roads are back with new works that show their growing breadth of style and artistic maturity. We feel a strong commitment to this new generation and are proud that Open Roads has become its most important showcase in America.”

Open Roads: New Italian Cinema has been organized by The Film Society of Lincoln Center together with Cinecittà Luce- Filmitalia and the support of Ministero per i Beni e le Attivitá Culturali (Direzione Generale per il Cinema) in collaboration with the Italian Cultural Institute of New York. Special thanks to the Italian Trade Commission-ICE Los Angeles, the Alexander Bodini Foundation, Casa Italiana Zerilli-Marimó and Antonio Monda for their generous support.

Opening Night Film
The Salt of Life
Gianni Di Gregorio, 2011, Italy; 90m
Distributed by Zeitgeist Films
In his warm and witty follow-up to his 2010 sleeper hit Mid-August Lunch, writer-director-actor Gianni Di Gregorio has created another sparkling comic ode to the ladies in his life—but this time he plays a middle-aged retiree who has become invisible to all distaff Romans, regardless of age or relation. In The Salt 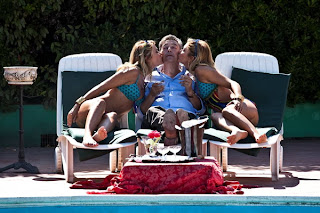 of Life (Gianni e le donne), he contends with an aristocratic, spendthrift mother (again played by Lunch’s great nonagenarian Valeria de Franciscis); a wife who is more patronizing friend than romantic partner; a daughter (played by Di Gregorio’s daughter Teresa) with a slacker boyfriend whom Gianni unwillingly befriends; and a wild young neighbor who sees him merely as a dog walker. Watching his “codger” friends snare beautiful younger women on the sun-kissed cobblestones of Trastevere, Gianni tries his polite, utterly gracious best to generate some kind of extracurricular love life—with both hilarious and poignant results.
Screening on June 1, 4

1960
Gabriele Salvatores, 2010, Italy; 75m
The director of Mediterraneo assembles from the RAI TV archives a fascinating portrait of Italy in boom times, chronicling a family’s search for a son.
Screening on June 7

20 Cigarettes / 20 Sigarette
Aureliano Amadei, 2010, Italy; 94m
A young antiwar activist heads to Iraq to work on a film and quickly finds himself a victim of sectarian violence and, soon, an unlikely hero.
Screening on June 1, 6

Unlikely Revolutionaries / Figli delle stelle
Lucio Pellegrini, 2010, Italy; 102m
After botching a high-profile kidnapping, a group of disillusioned northeasterners are forced to learn how to coexist under absurd and clandestine conditions.
Screening on June 1, 5

The First Assigment / Il primo incarico
Giorgia Cecere, 2010, Italy; 90m
A hit at the Venice Film Festival, Cecere’s stunning debut follows a young teacher (wonderful Isabelle Ragonese) whose first posting brings her to a hardscrabble village with wild children and parents to whom she can hardly speak.
Screening on June 6

Sorelle mai
Marco Bellocchio, 2010, Italy; 105m
Marco Bellocchio returns to his hometown Bobbio, and to the house in which he shot “Fists in the Pocket”, to narrate the story of the hopes, disappointments and yearnings of his own family. Bellocchio’s daughter Elena stars with other family members Maria Luisa, Letizia and Piergiorgio, as well as professional actors Donatella Finocchiaro and Alba Rochwacher. A personal, intimate project shot over a period of ten years with evocative references to some of his most famous films.
Screening on June 3, 7

Lost Kisses / Baci mai dati
Roberta Torre, 2010, Italy; 80m
In this playful satire, the theft of a Madonna statue’s head seems to trigger visions in 13-year-old Manuela, which are quickly exploited by her dysfunctional family.
Screening on June 2, 4

On the Sea / Sul mare
Alessandro D’Alatri, 2010; 100m
In a beautiful, stunningly immediate rendering of a love affair’s first flowering, a tour-guide and a student from Genoa strike up a bond.
Screening on June 3, 5

The Passion / La Passione
Carlo Mazzacurati, 2010, Italy; 106m
After a leak in his Tuscan apartment destroys a chapel’s fresco, a has-been director agrees to stage some Good Friday celebrations, which quickly turn challenging...
Screening on June 2, 5