Potiche with Catherine Deneuve Opens May 13 in Toronto, Montreal, Vancouver

on May 13, 2011
eOne Films presents
POTICHE
A Film By François Ozon 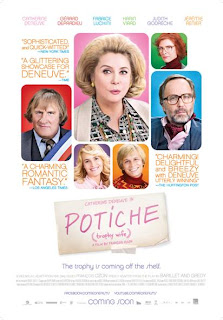 *Premiered at the 2010 Toronto International Film Festival
Opens in Toronto, Vancouver and Montreal on Friday, May 13, 2011

North of France, Sainte-Gudule, 1977. Suzanne is the submissive, housebound wife of wealthy industrialist Robert Pujol, who oversees his umbrella factory with an iron fist and is equally tyrannical with his children and ‘trophy housewife’. When the workers go on strike and take Robert hostage, Suzanne steps in to manage the factory.

To everyone’s surprise, she proves herself a competent and assertive woman of action. But when Robert returns froma restful cruise in top form, things get complicated...