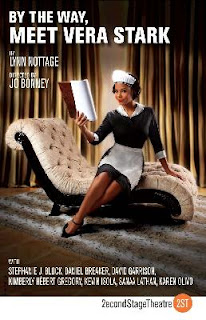 In a new comedy from the Pulitzer prize-winning playwright of Ruined, Lynn Nottage draws upon the screwball films of the 1930’s to take a funny and irreverent look at racial stereotypes in Hollywood.

By The Way, Meet Vera Stark is a seventy year journey through the life of Vera Stark, a headstrong African-American maid and budding actress, and her tangled relationship with her boss, a white Hollywood star desperately grasping to hold on to her career. When circumstances collide and both women land roles in the same Southern epic, the story behind the cameras leaves Vera with a surprising and controversial legacy scholars will debate for years to come.

Vera Stark's story continues at www.meetverastark.com, where you'll find excerpts from her autobiography, her complete filmography, and Herb Forrester's short documentary, "A Leading Lady in a Maid's Uniform: A Closer Look at The Belle of New Orleans".

In March , 2001 the cast of Lynn Nottage’s new play, By The Way, Meet Vera Stark collaborated with Stage Director Jo Bonney, filmmaker Tony Gerber and cinematographer Stuart Dryburgh to re-create the finale of the 1933 film-within-the-play “The Belle of New Orleans.”