The COC's production of Ariadne auf Naxos has a light touch to it that squeezes out the laughs in Strauss' comedic opera effortlessly, eliciting more than a few guffaws from the crowd last night. 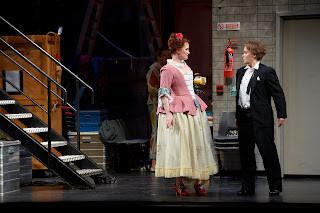 The story involves an opera within an opera. Interestingly, Strauss first conceived of the piece to be performed simultaneously with Molière's "Le Bourgeois Gentilhomme". That version evolved into a story where a "serious" opera company has been commissioned by an unseen but heard from count, who becomes concerned that the Composer (played with deliciously tortured artistic abandon by soprano Alice Coote) has set the piece on a desert island (in his well appointed estate!) To pick up the slack, he's hired a second troupe of comedians and burlesque performers to "add" to the plot. "If she's lonely," he says of the abandoned Ariadne, "then we'll get her some company!"

Artistic objections ensue, and the first half really belongs to Alice Coote, who sang with a convincing vulnerability overplayed for laughs as the Composer argues in vain against the intrusion on his script, giving a sermon on the sacred nature of music sure to have come directly from Strauss' own heart.

The second act shifts from the dressing rooms to the makeshift stage - compleat with tattered curtains - and the mash up performance that pits soulful and sorrowful Ariadne (Adrianne Pieczonka) against vixenish Zerbinetta (Jane Archibald), star of the farcical story of a fickle woman and her four lovers. "Why God, if we are to resist men, do you create such endless variety...?" she laments. 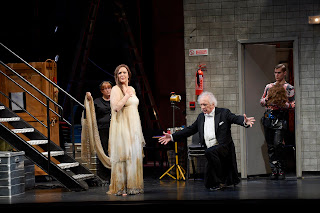 The two make a dramatic contrast, and I was particularly impressed by the dramatic abilities of Adrianne, who went from the first act's petty Prima Donna to the epitome of desolation and lonely heartbreak.

The other characters and performers added to that sense of contrast - noble demi-god Bacchus (Richard Margison) and a trio of nymphs vs. Zerbinetta's clownish quartet of suitors - along with what begins as a contrast of themes and ends as something much closer to the middle. When Ariadne decides to accept Bacchus' love and live in the world again, isn't she just making the same choices as Zerbinetta after all?

It's a very entertaining production, with the gorgeous score conducted by Sir Andrew Davis. 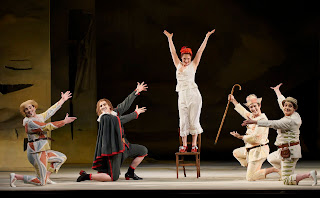 Ariadne auf Naxos
April 30 to May 29, 2011
On stage at the Four Seasons Centre, 145 Queen St. W., Toronto. Performance time is approximately two hours, 25 minutes with one intermission. Sung in German with English SURTITLES™.