TORONTO – MAY 2011 – Lula Music and Arts Centre in partnership with CBC Toronto proudly presents SÍ CANADA: A FEATURED TWO-PART SERIES, as part of LULAWORLD 2011.The Latin music scene in Toronto and all of Canada is exploding - and the world is listening! 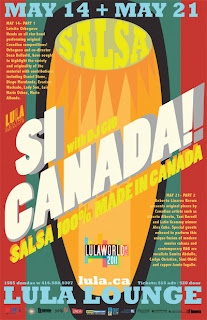 Not long ago there were only a handful of Latin bands in Toronto; the city now boasts more than a dozen distinct groups comprised of professional A-list artists. SÍ CANADA will showcase some of these artists and feature Canadian salsa compositions performed by exceptional musicians such as Peruvian-born percussionist and musical director of Part One, LUISITO ORBEGOSO, co-director SEAN BELLAVITI, Latin jazz guitarist LUIS MARIO OCHOA, and Part Two’s musical director ROBERTO LINARES BROWN. For more information please visit www.lula.ca

While established musicians such as Hilario Durán, Amanda Martinez and Latin Grammy winner Alex Cuba have gained international recognition, the next generation of Canadian stars is already rising.

Multiple waves of immigration from Latin America over the past three decades have allowed Canada, (especially Toronto), to become a hotbed for the creation of many musical forms with roots in the tropics. Top level artists with heritage in Colombia, Mexico, Chile, Peru and of course, Cuba, are composing, performing and recording original material and redefining what we think of as Canadian music. These innovative performers mine a wide range of musical styles, often fusing diverse Latin rhythms in a way that reflects the unique cultural diversity of Toronto.

By hosting two nights of Latin music every week to give bands consistent exposure and broaden their audiences, the popular Toronto venue, Lula Lounge, in conjunction with Lula Music and Arts Centre, has become an incubator in which new bands can develop and flourish while established groups have the opportunity to perform new material live. 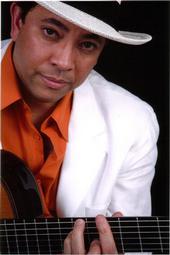 The sophistication and complexity of the music being produced has attracted many collaborations across genres, especially with Toronto's vibrant jazz scene. Many young, talented, non-Latin Canadian musicians (such as Sí Canada project coordinator Sean Bellaviti) have enthusiastically embraced and become integral contributors to the city's salsa community. At the same time, Latin musicians are reaching out to include influences from hip hop, jazz and soul. For example, part two of Sí Canada will include several pieces featuring local soul and R&B vocalists Samira Abdulle, Carlyn Christian, Simi Obidi and rapper Jamie Iagallo. (Luis Mario Ochoa is pictured)