Stephen Burks: Man Made at the Studio Museum, Harlem NYC to June 26

Stephen Burks is an industrial designer whose work I checked out recently at his show at the Studio Museum in Harlem. His work explores craft in a global context, in particular and specific to this show, his

collaborations with Senegalese basket weavers. The entire show is anchored by the basic concept of basket weaving - baskets reconfigured and reimagined.

The exhibition includes a variety of pieces along with videos that show the meticulous work as it progresses, speeded up so you can take in the whole process. It's fascinating work and I marveled at the skill of the artisans as they deftly produced row after perfect row.

Burk's pieces included baskets woven in a combination of sweetgrass and brightly coloured strips of polyethylene. They create a truly mesmerizing effect, especially a whole room of them. The show demonstrates their practical utility too, using them as speaker and light holders. A few pieces were made entirely of recycled polypropylene. I've always - since childhood - been plastic averse, there's something 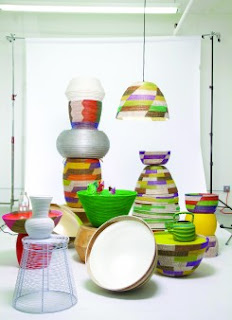 about it I've never liked, but I actually found myself ignoring the medium because of the sheer visual appeal of Stephen Burks' work.

A smaller room off the main gallery is showing Sculpted, Etched and Cut Metal Works from the Permanent Collection, and while there aren't many pieces due to the size of the room, I loved the work of Stephanie Pogue and Haitian artist Edgar Brierre, particularly the latter's Rooster, cut from oil drums, as was La Sirene and her Playmate by Georges Liautaud. The pieces were playful and lyrical.

I didn't have time to look at the other shows in detail, but I did pick out Benjamin Patterson's Ants Revisted - avant-garde work with a sense of humour from the show Born in the State of FLUX/us: Scores - along with a piece by Brooklyn based artist Wangechi Mutu, who's one of my favourite artists anywhere.
african art black art harlem culture industrial design studio museum harlem visual arts