Toronto Gets Kinky (Friedman) - Concert for Koffler Centre May 4 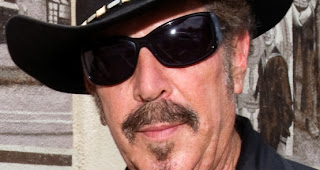 [Toronto ON]  On Wed May 4, Toronto gets Kinky when (self-acclaimed) “original Texas Jewboy”,  Kinky Friedman performs at the St. Lawrence Centre for the Arts (in support of a most worthy cause - the programs and classes offered by the Koffler Centre of the Arts).

Kinky Friedman is one of the most colourful and most entertaining characters you’ll ever meet. Why?  Because in these politically sensitive times, Kinky Friedman says it like it is – and he’s been doing it for years. Once called “the Frank Zappa of country music”, he’s also described himself as "a Jewish pain-in-the-ass".  But you’ll call him the missing link, friend to the common wo/man and one hilarious night out!

Since Kinky’s first record in ’66, he’s been laying waste to everything from surf music to rednecks, bad politicians to ridiculous laws.  When he’s not singing about it, he’s writing about it – authoring 29 books and counting.  Perhaps you’ve heard some of his classic songs? Like “They Ain’t Making Jews Like Jesus Anymore" or “Asshole from El Paso“?  The irreverent Friedman has successfully transformed real life into a complete joke, applying liberal amounts of social conscience to everything he’s ever done.  After singing and writing, what next but politics? He’s run for Governor of Texas (“He Ain’t Kinky, He’s My Governor”) twice and for Justice of the Peace in his hometown of Kerrville. 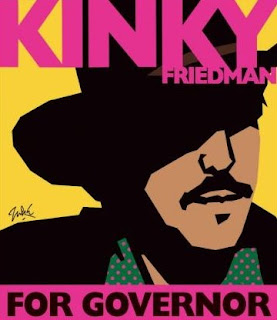 The comically cerebral, bullshit-detecting, 66-year old human beehive comes from a long line of famous fellow Texans like Tex Ritter, Howard Hughes, Clyde Barrow and Bob Wills.  While they’re dead, Kinky’s very much alive, making a nuisance of himself all the way to the hallowed halls of Washington. He’s been to the White House, as guest of the Clintons.  He’s the only, as he says, full-blooded Jew to have played the Opry, has starred on Saturday Night Live and recorded the only live show for Austin City Limits that never aired!  And he hangs with music’s finest – like Willie Nelson, Lyle Lovett, and Dwight Yoakam.

Under cover of appearing politically incorrect, Kinky is often found to be far from it.  He has bold opinions on many hot topics: from immigration and the legalization of marijuana to the abolition of the death penalty (quite a thing to say in Texas) and reproductive rights for women. He also a staunch advocate of environmental causes, animal rescues, higher pay for teachers, alternative fuels and farming over development.

Meet the man discovered by Commander Cody and who toured with Bob Dylan’s Rolling Thunder Revue as he brings his bittersweet catalogue and outspoken thoughts to Toronto for one night only. Savour his social commentary and acute observations, his raucous humour and biting satire. You’ll laugh. You’ll cry. You’ll sing. You’ll smile. And you’ll help in a good cause.

About the Koffler Centre of the Arts
Koffler Centre of the Arts is a Jewish cultural institution with a broad mandate to serve all, and present a wide range of artistic programs through a global lens in a specifically Canadian context. The Koffler’s mission is to bring people together through arts and culture to create a more civil and global society. Its unique mix examines the arts across different disciplines and cultures in a way that strengthens identity while encouraging an appreciation of difference.

Iconic Texan Kinky Friedman Serves Up A Night of Raucous Humour & Biting Satirical Songs 'n' Stories
A Koffler Centre of the Arts Fundraiser
St. Lawrence Centre for the Arts, 27 Front Street West, Toronto
Wed May 4, 8:00pm
Cowpokes $100 (incl. show, after-party with southern-style dessert spread, where Kinky will be signing copies of his books.)
Texas Longhorns $250 (above plus pre-performance Smokin’ Hot Reception with Texas down home BBQ, the best seats in the house)