The Director Carl Leblanc, and the film’s subject and survivor, Fania Feiner and her daughter Sandy, will be in attendance. 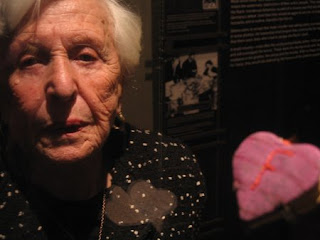 Toronto – At once a historical saga, a detective tale and a portrait of survival, the story of The Heart Of Auschwitz begins on the 20th birthday of Auschwitz inmate Fania Feiner. On that occasion, Fania received a small heart-shaped book containing birthday greetings from 12 fellow women prisoners. “May your life be long and sweet,” wrote a woman named Mazal. “Freedom, freedom, freedom,” wrote another, named Mania.

Ms Feiner survived and managed to hold onto the book. She later donated it to the Montreal Holocaust Memorial Centre, where it caught the attention of filmmaker Carl LeBlanc. Intrigued by the metaphorical question marks that hung over these names and their defiant visions of a brighter future, he decided to trace its history, and travelled the world in search of survivors among the 12 signees.
Leblanc has often said he felt Jewish after making this movie.
documentary film films about auschwitz films about the holocaust independent film toronto jewish film festival 2011