In a changing world, what defines a Jew?
TJFF is proud to present, and host the World Premiere of
Between Two Worlds
a documentary film by Deborah Kaufman and Alan Snitow

A Panel Follows Screening, moderated by Michael Enright, with filmmakers and special guests.

(Toronto – May, 2011) – Numbering a far-flung 15 million in a world of billions of Christians and Muslims, the cohesiveness of the Jewish population is both astonishing and ever-evolving. 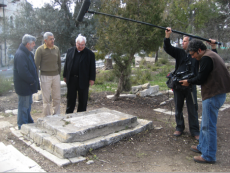 TJFF is honoured to host - on Sunday May 15th, 3:30pm, at the Al Green Theatre - the World Premiere of Between Two Worlds, a documentary film by Deborah Kaufman and Alan Snitow.

This personal documentary explores the divisions that are redefining Jewish identity and politics. The filmmakers’ own families are revealed as microcosmic battlegrounds over the issues that define Jewish existence today - loyalty to Israel, interpretations of the Holocaust, and intermarriage.

Directors Kaufman and Snitow will be in attendance and a panel will follow the screening that will discuss the resonant question, “Who Speaks for the Jewish Community?” Michael Enright will moderate a panel that include directors Kaufman and Snitow, filmmaker Fern Levitt (7 Days of Remembrance… and Hope), Daniel Sokatch, who appears in the film, and Lori Starr, Exec Director of Koffler Centre of the Arts and VP, Culture, UJA Federation of Toronto.