Tulip, Texas and Us by Lee Filipovski at the Ryerson U Film Fest May 14

on May 13, 2011
I have a small yet revealing (it's a shower scene, he he) part in this film, getting its World Premiere as it closes the Ryerson University Film Festival Saturday, May 14

Tulip, Texas and Us
directed by Lee Filipovski

Ticket can be purchased from the Ryerson University Film Festival web site. 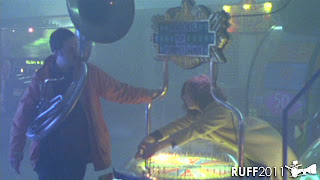 SYNOPSIS:
Nancy wears green stockings, Peter plays the sousaphone. They are caught in a whirlwind of Balkan brass music, poodles and cigarettes.

The screenings begin at 7:00pm.
Tulip, Texas and Us got the privilege of closing the festival.
Advance tickets at the Ryerson University Film Festival web site.