International cabaret sensations 2boys.tv embarked on a quest to confront their relationship with the generation that vanished with the AIDS crisis. In particular, they wished to address what they perceived as a societal amnesia surrounding this loss. Their journey led them to Mexico, Central and South America

where they encountered stories of individuals and cultures threatened by a systemic suppression of memory.

The result of this pursuit is Tightrope, a theatrical song-cycle for the forgotten. Backed by a virtual choir of international singers and musicians, 2boys.tv summon the shadows, apparitions and voices of the past in a multimedia tribute to our departed. Tightrope is a powerful invitation for us all to remember our “disappeared” together.

As cabaret performers, Montreal-based 2boys.tv elevate drag performance to the level of a sacred art form. For Tightrope,  they have gathered a chorus of local drag queens and genderqueer performers to play the roles of sublime high-camp phantoms. Through a virtuosic display of multimedia technology, this queer
chorus interacts with projections to create a stunning visual spectacle. Within the cosmology of the performance, these queens function as profane shamans who can ease suffering and grief by uplifting our spirits.

Tightrope’s international scope began with a residency in Chiapas, Mexico. This was organized through the Hemispheric Institute of Performance and Politics, a division of New York University which fosters creative 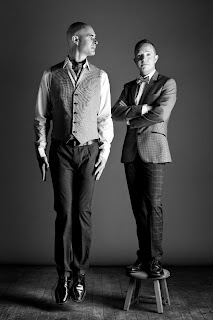 collaborations among artists across the Americas.

In Mexico, 2boys.tv worked closely with FOMMA, an organization whose mission is to empower, through theatre creation, Mayan women and children who have suffered the devastating consequences of an extended civil war. Along with the women of FOMMA, 2boys.tv established the choral song cycle which became the central structure of Tightrope. Since that time in Mexico, 2boys.tv have assembled a global crew of collaborators, many of whom appear virtually through video projections.

Tightrope also features live accompaniment by internationally-renowned Lebanese producer and musician Radwan Ghazi Moumneh, whose solo project Jerusalem in my Heart has opened for the likes of Diamanda Galás. Radwan is well-known as the engineer behind several Montreal superbands such as Arcade Fire, Wolf Parade and The Dears. Tightrope also features Montreal-based performance artist and musician Alexis O’Hara.

Award-winning transdisciplinary duo 2boys.tv are Stephen Lawson and Aaron Pollard. Partners in life and in art, they have created and presented a wide repertoire of multidisciplinary cabaret works, performances, videos and installations in clubs, galleries, museums, theatres and festivals around the world. They were the 2009 recipients of the Canada Council Victor Martyn Lynch Staunton Award recognizing outstanding mid-career achievement in the field of Integrated Arts.

Praise for 2boys.tv:
"magical mix of cabaret and video... nothing short of genius" –Montréal Mirror
"the most technologically sophisticated, superbly staged, and intricately timed multi-media experience I have had in quite some time" –San Francisco Bay Times
“Montreal's own 2boys.tv are among the city's most interesting creators” –Hour Magazine

Photo of Stephen Lawson and Aaron Pollard by Tanja-Tiziana, doublecrossed.ca