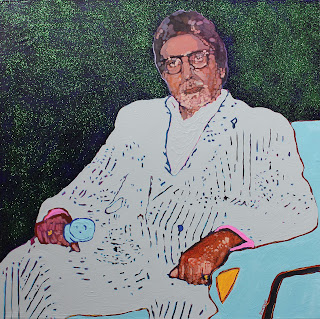 The exhibit looks at examining the ‘Pop Idol’ phenomenon and how celebrity culture influences people’s perceptions.

Mitic was asked to showcase his coveted painting of world famous film actor and producer, Amitabh Bachchan, in honor of the upcoming 2011 International Indian Film Academy Weekend and Awards,

that is being held in Toronto from June 23rd to 25th, Mitic has painted one of Bollywood’s most revered stars.

Amitabh Bachchan got his start in Hindi cinema in the early 1970’s, since then he has been nominated and won several prestigious awards including 3 for best actor.

ABOUT VIKTOR MITIC: Artist Viktor Mitic had made headlines with his controversial gunshot paintings, which feature portraits of celebrities, famous figures from history

and politics, and religious icons, as well as famous works of art outlined in bullet holes. Shocked by recent incidences of defacement of sacred works of art by fanatics-for example, the destruction of Buddhas of Bamiyan by the Taliban, Mitic's goal was to use weapons in his art to create rather than to destroy. Guns are naturally perceived with uneasiness, and the image of an artist shooting a painting carries an intense psychological impact; however, the juxtaposition of beauty constructed out violence in Mitic's paintings generates an unexpected feeling of tranquility.
celebrity art mississauga living arts centre visual arts visual arts in toronto