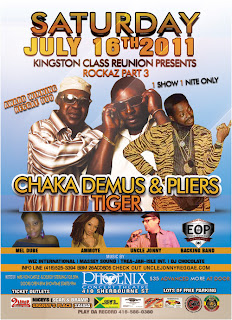 Kingston Class Reunion presents "Rockaz Part 3" - featuring Chaka Demus and Pliers, singing your favourite reggae songs including their hits such as "Murder She Wrote" and "Tease Me". Local artists will include: Mel Dube, Ammoye, Jill Donaldson and Uncle Jonny.

Chaka Demus (John Taylor) and Pliers (Everton Bonner) will be in the city for the first time in a decade. They were the first Jamaican act to place three consecutive singles in the top five of the British music charts.

Their thirty year collaboration has produced many highlights, with songs featured in the movie soundtracks for Poetic Justice (starring Janet Jackson & Tupac Shakur) and Save the Last Dance (starring Julia Stiles and Sean Patrick Thomas).  Hits such as “Murder She Wrote,” “Twist and Shout” and “Tease Me” have achieved gold, platinum and two time platinum status.