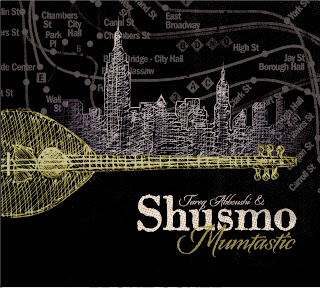 Shusmo is a secret passageway that winds past all the barriers dividing Arabic maqam from down-and-dirty funk, Latin spark, and swinging jazz. Headed by Palestinian pianist and buzuq player Tareq Abboushi, the quintet leads you to a little underground club where pensive classical forms meet dance floor-friendly vibes, where folk tunes open up into gritty jams. "Shusmo" roughly translates as "whatchamacallit" in Arabic, and, like its name, the group is hard to define.

But its aims are clear: a new genre of Arabic music. Mumtastic (June 23, 2011; at Joe's Pub NYC)-a combination of "fantastic" and "mumtaz" (Arabic for "excellent!")-gets grooves and a progressive acoustic spirit to shake up ancient microtonal modes and complex rhythms.

"What I'm working towards is an alternative Arabic music. Now, you're either sitting listening to classical music or you're dancing to pop in a club. And there's too little in between," Abboushi reflects. "We need something that works like Stevie Wonder, that has soul and musicality and that you can also move to." 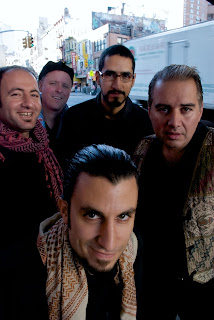 The combinations heard on Mumtastic were a long time coming for Abboushi, who grew up in the Palestinian town of Ramallah, listening to afternoons of piano, as taught by his mother, and to Arabic classical music, which flowed from every radio. Arabic classical greats, like the incomparable Egyptian singer Oum Kalthum, had hours devoted to them on the air every day. Abboushi recalls being able to hear a whole 40-minute-long piece simply by walking past stores and open windows on his way home; everybody was tuned in.

Drawing on this musical atmosphere, "Dal'Ona" wraps traditional wedding banter stuffed with local Palestinian slang in a twisting, irresistible bass line that nods to both James Brown and Fairouz. "Longa Nakreez," based on a classical Turkish form, rocks, with a grungy buzuq and shredding clarinet (Greek player Lefteris Bournias) where the electric guitar should be. Tracks like "Georgina +2" launch on serious explorations of Arabic elements (the georgina-inspired rhythm or a bluesy Kurd mode), only to jump into a hip-swaying, Latin percussion-laced breakdown midway. The beats fly off the riq (Arabic tambourine) and the congas and timbales.

Abboushi, raised hearing plenty of Western classical music and classic rock, only started playing Arabic music as a young man at the conservatory in Ramallah, after seeing a fellow student playing the buzuq, a long-necked lute with moveable frets used throughout Syria, Lebanon, and Palestine in folk music. Yet it was while studying jazz piano performance several years later in the U.S. that Abboushi first got the urge to combine the 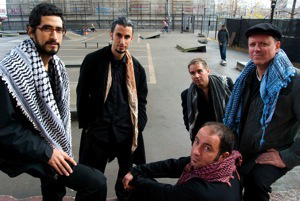 One challenge: Western music-from Beethoven to bebop to Black Sabbath-is powered by chords. Arabic music, however, is all about melody. "The answer is counterpoint," explains Abboushi. "You can have harmony between different lines, but it's not the harmonic progressions that move things forward. You're just writing lines that weave together and create harmony between them. Melodies interact with each other dynamically and keep things rolling," a fugue-like effect that shines on pieces like "The Time It Takes."

While tackling rhythmic and melodic complexities, Shusmo and Abboushi have attempted to illustrate the fraught and complicated qualities of Palestinian life-both the quirky world of the exile and the confusing and heart-wrenching state of affairs back home.

"The Wall" is Abboushi's attempt to come to musical terms with the contradictions and rage he saw around the barrier wall that now surrounds his home area. Neighbors are now separated by an insurmountable physical and political obstacle that chops communities and landscapes in two.

"It is easy to hate the wall that has been built by Israel imprisoning Palestinians and separating them from each other, their land, their schools, their work, and even their sunset. But when you see Palestinian workers taking part in the construction so they can support their families, what type of emotions will you have then? Or when you see Palestinian children laughing and enjoying their new slide created by the slanted roof of their home, which was demolished by the Israeli government, how can you express that mixture of emotions?" Abboushi reflects.

To get at this emotionally challenging place, Abboushi wove together several musical themes that had been floating around in his mind, creating a longer, pensive work that he's currently turning into a multi-media project with the help of several artists.

Shusmo's work points to greater currents sweeping across the Arab world. While on the political front, thoughtful and fed-up youth are taking on regimes across the Middle East and North Africa , there is a parallel cultural movement that extends across the arts. "This kind of creative expression was dormant for too long. But there's an Arabic cultural scene that's been on the rise on many levels, from stand up comedy to film to conceptual art." Abboushi notes. "I'm very happy to see that such a creative cultural movement is growing and I'm proud that Shusmo is part of it."