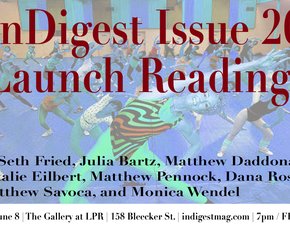 InDigest (indigestmag.com) celebrates the recent release of issue #20 with a reading from the issue's contributors (or at least the contributors from the New York area). Among the readers are Seth Fried, whose collection of stories, The Great Frustration

• Julia Bartz is a writer and editor living in Brooklyn, NY. She blogs at bookstalker.tumblr.com. (she's pictured below)

• Matthew Daddona is a poet and assistant at Donadio and Olson literary agency.

• Dana Rossi is a writer, performer, and hopeless music nerd. She has written for several publications and websites, including Time Out New York, Broken Pencil, New York Press, and The Retroist. She is the recipient of a 2008 New York Press Association Award for a feature about understudies to celebrities on Broadway. Dana writes and tells a story for every Soundtrack Series, but in addition to the Soundtrack 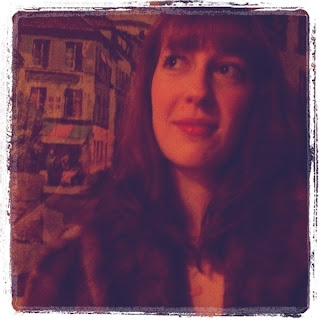 Series, she has also performed stories for reading series run by InDigest magazine as well as Quickies, a spin off of the In the Flesh series hosted by erotica writer and editor, Rachel Kramer Bussel.

Dana’s music nerdery covers the basics (start Dark Side of the Moon on the MGM Lion’s roar before The Wizard of Oz…Pat Benetar was the first woman played on MTV…etc.) but it does not imply any kind of holier-than-thou hipster factor. She’s a true nerd— an aficionado who is also proudly well versed in everything that makes music vastly uncool—the work of cheesy 80s one hit wonders or early 90s supergroups, the soft sounds of the late 70s, the b-sides to Carpenters 45s, and the words to Kenny Rogers songs other than “The Gambler”. It ain’t glamour knowledge, but sometimes it’s just fun to know about Michael Nesmith’s solo work.

InDigest was founded in 2007 by writers David Luke Doody and Dustin Luke Nelson as an online home where a dialogue between and about the arts may be struck. The magazine is home to poetry (Rodrigo Toscano, Stephen Burt, Ronaldo V. Wilson, Jen Knox, Alex Lemon, Ada Limon), fiction (JC Hallman, Roxane Gay, Peter Bognanni, Geoff Herbach, Sam Osterhout, Nicole Hefner, Tao Lin), online broadsides, the InDigest broadcard printing series, The InDefinite podcast, e-books, criticism, art, interviews, and more. InDigest is also the home for the print series from InDigest Editions. The first release, We Are Doomed: Dispatches from the City of the Future by Brad Liening, is out now.