Beyond eclecticism for its own sake, the seven-piece, multi-generational, and multi-ethnic Freshlyground bring together easy-going hipsters and scene veterans, fiery singers and cool production. An unexpected sensation in South Africa, the unlikely pop stars landed on the charts out of the blue. They joined a shimmying Shakira on the 2010 FIFA World Cup theme, "Waka Waka (This Time for Africa)."

Now, they explore the full, powerful possibilities of their collective pasts on their latest album, Radio Africa

. And the group's bountiful diversity will hit North America (including New York, San Francisco, DC, Philly, Montreal, Vancouver) for the first time, as the group tours in June and July , in a live show bursting with bold energy, wry humor, and skillful spontaneity.

Freshlyground-whose name evokes the fresh mix of just-crushed herbs-fearlessly dives into crates of traditional instruments, pointed political critique, poetry notebooks, and well-loved Southern African pop forms. They channel the sunny openness of hip Cape Town and the intense energy of singing ancestors. The mix is catchy, driving, and refreshingly upbeat, even when songs take aim at social ills and the folly of misguided politicians.

"We've always been different from other bands, in part because we have the flute and violin as mainstays," notes the Zimbabwe-born, classically trained Simon Attwell, who plays flute and mbira (thumb piano) with the group. "That's always been integral to what we're about and what people enjoyed: the mix of dif influences and instruments." 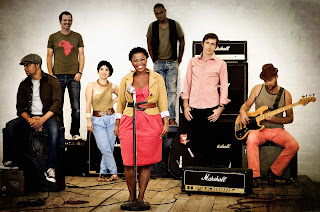 This mix comes naturally to the band, a product of the rich complexities of contemporary South Africa. "There are so many cultures. There are so many people like us, who adhere strictly to their heritage yet mix constantly here in South Africa," explains singer and lyricist Zolani Mahola. "People are in contact with the world, but they are very proud of their ancestors and culture."

The petite firebrand of a singer and actress should know. Raised in a traditional Xhosa family and educated in Catholic schools, the joyfully bold Mahola leaped up mid-set during an early show and started singing. The trio of musicians jamming on stage were flabbergasted, but insisted she come to their next rehearsal. A roots music-loving violinist, a sparkling guitar wizard from Mozambique, a veteran bass rebel who had played with Johnny Clegg soon followed. Freshlyground was born.

The band turns the freewheeling jams Cape Town is known for into perfectly balanced pop songs with deep Southern Africa roots. "Moto" began as a popular song from Mozambique's civil war era that guitarist Julio Sigauque heard his grandmother sing. Mahola, who writes in both English and Xhosa, uses the call

and response structure of many traditional songs on gorgeous tracks like "Waliphalala'lgazi."

And violinist Kyla Rose Smith, raised on folk and Americana, brings maskanda-style fiddling to the table, using traditional Zulu double stops and sonorous intervals with a distinct passion and rootsy verve on songs like "Baba." "The violin parts sound similar to the maskanda guitar," Smith says. "The sound is almost Irish, but the harmonies are uniquely South African."

To get seven very different musicians to play in harmony requires an open approach. The band noodles with chords, jams together in twos and threes, or plays around with a box of traditional percussion instruments sent over by a local factory. As the musicians sort out parts, Mahola will often dig into her notebooks of poetry, finding words to tell the stories of township women and distraught lovers, or to critique leaders like Zimbabwe's Robert Mugabe ("Chicken to Change").

"It's a workshop environment. We'll start with a groove or a riff and work it," Attwell states.

"We have to keep the groove going, as we're trying to organize the instrumental parts and to hold ongoing negotiations about what we're focusing on. You feel you're involved in a creative hub." 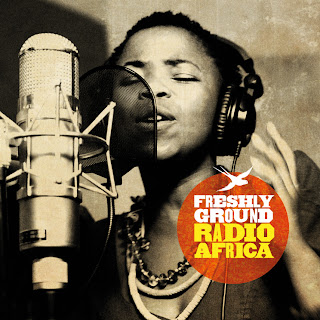 But these sometimes chaotic creative bursts become finely honed, catchy, and often gritty pop pleasures. "Big Man" makes En Vogue-style vocal harmonies get down to sunny Afropop melodies and a phat, bouncy bass. An electronica-laced call-and-response indictment of unemployment darts over ska beats, as flute and violin leap in to have their say on "Working Class." Dreamy panpipes get run through old-school tape delay. Mbiras get distorted.

This mix of roots, inspiration, and craft has taken Freshlyground from selling CDs out of their trunks to playing World Cup soccer stadiums in a few short years. Freshlyground has gotten Zimbabwean festival audiences hopping, Japanese shopping malls buzzing, and even gotten dour Eastern Europeans grooving.

"We played in an old tank factory in Latvia," recalls Smith with a smile. "We were sharing the bill with a very intense trip hop group. They were all dark and heavy, and we're this light, happy band, in this tank factory. We thought it wasn't going to go down. But by the end of it, even the big Russian security guards were singing along and dancing. Everyone told us they'd never seen anything like it before."