This time, backed by conventional western instruments, Arby creates on stage extraordinarily unconventional music.  Her presence at SXSW could not be ignored:  featured in showcases for NPR, 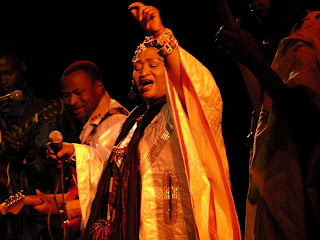 National Geographic Music, The Fader Fort, and All Music is World Music, her evolution as an international performer has rendered her relevant among today's top indie artists, yet she has somehow managed to maintain her richness in ancient African tradition.

Arby mesmerized audiences at this year's SXSW in showcases for NPR, The Fader Fort, National Geographic Music, All Music is World Music (The World on WGBH Boston and KUT Austin) in standout performances at a festival known for once-in-a-lifetime shows.  This intensity comes as much from her home as it does her unique spirit.  Born in a village not far from the famed city of Timbuktu , Arby is firmly planted in the desert sand. Her creativity flows in part from the people of her home region of Northern 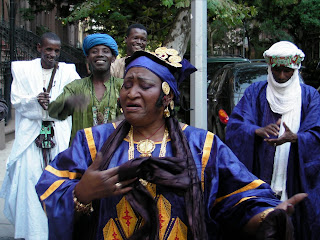 Mali-the young musicians in her band all hail from Timbuktu-and from their past and present struggles. As Arby puts it, "Trab is our land, our home, Timbuktu. Its history, its mystery, everything..."

, shifts seamlessly between the edgy and progressive and the traditional and deeply rooted. Inspired by her cousin Ali Farka Toure, Arby turns to her mixed Berber and Sonrhai roots and draws on a sweet mixture of desert blues and recording sophistication, blending ripping electric guitar with the forefather of the banjo and funky drum breaks with the traditional percussion of the scraper and the calabash.