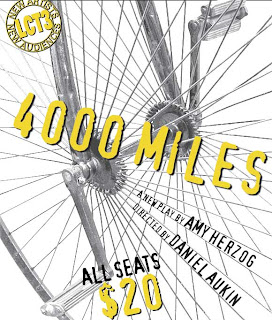 After losing his best friend while they were on a cross-country bike trip, 21 year-old Leo (Gabriel Ebert) seeks solace from his feisty 91 year-old grandmother Vera (Mary Louise Wilson) in her West Village apartment. 4000 Miles looks at how these two outsiders find their way in today’s world.

Playwright Amy Herzog also wrote After the Revolution, which ran at Playwrights Horizons in fall 2010 and is nominated for a John Gassner Award. Her plays have been produced or developed at the Yale School of Drama, Ensemble Studio Theater, Arena Stage, New York Stage and Film, Provincetown Playhouse and ACT in San Francisco.

Director Daniel Aukin has directed at Playwrights Horizons (This), the New York Theatre Workshop, The Play Company, Guthrie Theater, and Minneapolis' The Children's Theatre Company. He was Artistic Director of Soho Repertory Theatre for eight seasons, where his productions included Everything Will Be Different, Suitcase (which he also directed at the La Jolla Playhouse), Molly's Dream, and (sic) (for which he won an Obie Award).