Sampradaya Dance Creations performs
the World Premiere of TAJ
The awe-inspiring story behind one of the greatest wonders of the world
Concept by Lata Pada, Written by John Murrell, Directed by Tom Diamond
Commissioned by Luminato, Toronto Festival of Arts and Creativity
June 10 - 12

TORONTO - Sampradaya Dance Creations, renowned for its innovative dance productions under the 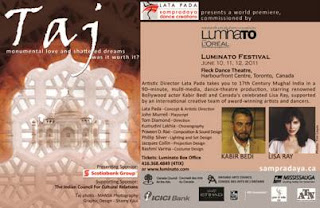 • TAJ runs June 10-12 at Harbourfront Centre's Fleck Dance Theatre as part of, and commissioned by, Luminato, Toronto Festival of Arts and Creativity. 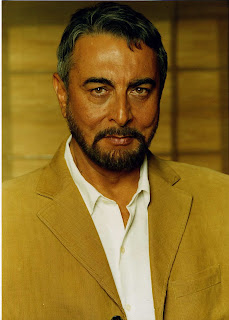 Celebrated through poetry, music, dance and projection, the Taj Mahal is symbolic of enduring love, yet the story behind this majestic edifice in marble is as awe-inspiring as the monument itself. Imprisoned by his son Aurangzeb, former emperor Shah Jahan gazes upon the Taj - his wife Mumtaz's final resting place and whose memory inspired the construction of this spectacular edifice - and engages in an impassioned dialogue with his devoted daughter Jahanara, taking the audience on an emotional journey that explores the emperor's life, the 17th Century Mughal Empire and the universal themes of ambition, revenge, rivalry and love.

Lata Pada is Artistic Director of Sampradaya Dance Creations, an award-winning company recognized for innovation and excellence that breaks new ground in choreography and performance with a synthesis of traditional and contemporary dance. She has had an extensive career as a bharatanatyam soloist with performances in prestigious dance festivals worldwide. Lata has been conferred the Order of Canada in 2009, and holds the distinction of being the first South Asian artist to receive this award. She was the recipient of the Pravasi Bharatiya Samman by the President of India in 2011. Her previous works for the company include Revealed by Fire, Shunya and SARUPYAM - Visions of the Divine. 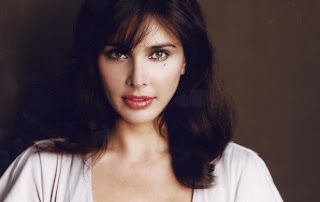 John Murrell (playwright) is one of Canada's most distinguished and most frequently produced playwrights. His best-known plays include Memoir, Waiting For The Parade, Democracy, The Faraway Nearby, Farther West, and New World. He is an Officer of the Order of Canada, and a recipient of the Governor General of Canada's Performing Arts Award for Lifetime Artistic Achievement.

Kumudini Lakhia (choreographer) is one of the foremost dance practitioners of kathak today. With a commitment of 70 years to kathak dance, this 81-year-old dance legend is considered a pioneer in her field. Her choreographies have been performed in India and internationally, and she has received a number of prestigious awards including the Padma Bhushan, India's third highest civilian award.

Sampradaya Dance Creations performs the World Premiere of TAJ
The awe-inspiring human story behind one of the greatest wonders of the world.