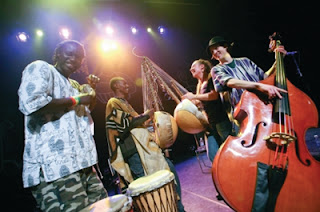 The Mandinka Empire was one of the most powerful empires in West Africa whose areas stretched over a region that includes big chunks of present day Mali, Benin, Senegal, Guinea and Gambia. The legendary Sundiata Keita founded the great Mandinka Empire; a rich culture and tradition has survived many generations. The exploits of Sundiata Keita are being retold by griots in song. This oral tradition of story-telling through music has influenced many musicians in West Africa, the same is true of their counterparts here in Canada. Kabakuwo is a band that is continuing this rare and rich tradition.

These four artists, all experienced in several African musical styles, took on the challenge of exploring traditional Mandinka music. In addition to traditional pieces, the group’s repertoire includes original creations with influences ranging from Latin beats and reggae but, above all, encompassing rhythms from Senegal and Mali. The group has performed at several festivals such as Festival Interculturel de Rawdon, Les Francofolies de Montréal and the Theatre de Verdure for Vues d’Afrique.

Together, the four musicians take on each traditional piece with integrity and respect for its origin but also with the inventiveness and inspiration that is allowed by this free instrumentation. The double bass and the koras switch between accompanist and solo roles, supported by percussion. In other pieces, they let the griot 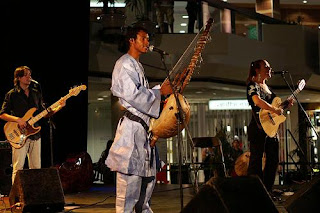 tell his stories and allow his voice to be heard, praising Mandinka kings. Kabakuwo is like a trip back in time, deep in the heart of West Africa, but with a sound that is unique and modern. www.myspace.com/kabakuwo