Bloodied But Unbowed
a film by Susanne Tabata 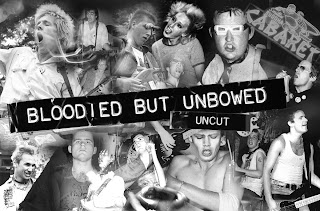 Toronto - June 10, 2011  Bloodied But Unbowed is the first in-depth look at the unique and creatively blazing Vancouver punk scene between 1977-1982. Touching on universal themes of alienation, rebellion, loss of innocence & regret, it is a true document of a scene marked by raunchy humour, illuminated via vast archival performance footage and commentary. 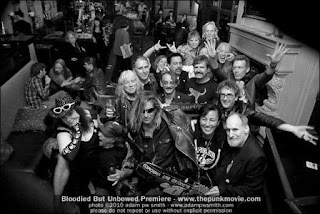 Leather, spit, beer, drugs, sex and righteously-enraged music terrified the mainstream in Vancouver in the 70s. Bloodied But Unbowed captures the ethos of the kids who barely lived through it, as well as those who did not. Drugs wreaked havoc in the punk scene, snuffing short the lives of many luminaries. But despite the harsh toll, some of Vancouver's most infamous sons (including Joe Shithead and eternal bad boy Randy Rampage) are still on the road, playing gigs, pissing on squares and generally causing an uproar.

Narrated by Billy Hopeless and packed with anger, drama and tragedy, Bloodied But Unbowed captures the rise and fall of an epic era. 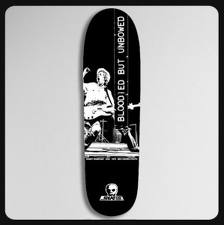 About Director Susanne Tabata
On the heels of SkateGirl and 49Degrees, Susanne returns with her first documentary feature, Bloodied But Unbowed - aka "the punk movie" - profiling the early punk scene in Vancouver as told by the surviving legends. Susanne was a DJ at UBC's CITR radio in that era, and she participated in the first live late-night cable music show Nite Dreems. Susanne has developed and produced many educational programs for young audiences in areas of social justice. Susanne was born on Vancouver Island in Nanaimo and lived in Tokyo & Victoria before moving back to Vancouver to study International Relations at the University of British Columbia.