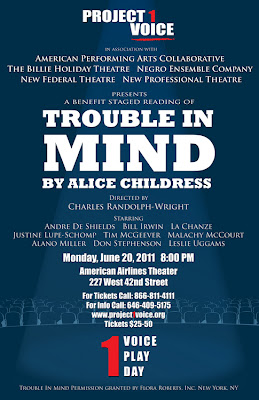 PROJECT1VOICE is a national grassroots movement designed to support and cultivate artistic excellence, creativity and innovation among African-American theatre organizations, along with preserving the legacies of these theaters and those of African-American playwrights.

It is our mission to engage people of every age with a continuum of experiences that reflect the virtuosity, creative and inclusive spirit of the arts. PROJECT1VOICE was created by Erich McMillan-McCall in 2010 after observing that many theater organizations around the country were financially strapped and barely keeping afloat in this harsh economic climate. The problem was magnified even more among historically African-American theater organizations, which have been the mainstay of employment for many minority theater professionals. With this in mind, Erich partnered with like-minded people and thus PROJECT1VOICE was born.

• On this day African American Theatre companies spanning the country will present a staged reading of the Alice Childress classic TROUBLE IN MIND.

It is imperative that our community spark renewed interest in the arts, the artists and the organizations that nurture them. This event seeks to build community interest not only in seeing the staged reading but by getting the community involved with their arts institutions by donating time, money, or items needed by the theatre.

PROJECT1VOICE is proud to take on the challenge of trumpeting our artistic resources so that they can sustain themselves now and into the future.

About Alice Childress & Trouble in Mind

Trouble in Mind is an incendiary and satiric drama based on the conflict of not compromising one's artistic integrity. It's a play within a play that follows the journey of a mixed race cast in 1957 as they embark on rehearsals for a racially charged play. Childress' script shows the actors' complaints, director's frustrations and even the well meaning efforts of theater professionals to overcome their racial feelings. As each character is revealed, along with their cavalier approach to the scripts they hold, there is so much humour that the playwright's theme within a them will leave audiences shocked and surprised at what was before them all along.

Alice Childress has been described as a distinguished woman of her time, a literary genius, a great collaborator and an inspiration of African American women in drama. While her work has been overlooked, it is time to give it the proper spotlight she deserves.

Born on October 12, 1916, in Charleston, SC, she moved to Harlem with her mother at age 9 to live with her grandmother. There she learned to approach life as an education and was encouraged to pursue her talents in reading and writing, but she was forced to end her high school education when both her mother and grandmother died, and in 1935 she found herself the single mother of a daughter. 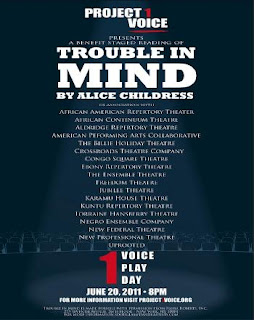 In 1939, she joined the American Negro Theatre in Harlem and caught the theatre bug after appearing in the play Anna Lucasta. She decided to become a playwright, and by 1949, had completed her first piece, called Florence. She was the first black woman to have her plays professionally produced on stage in New York.

When Trouble in Mind was scheduled to open on Broadway, the producers felt that the show needed more of an uplifting ending as well as a new title, but she refused to make the ending happier and more palatable to white audiences - so the show never made it to Broadway. That same year, Lorraine Hansberry's A Raisin in the Sun opened and became the critics' popular choice instead.

Childress followed her own agenda in writing, and her main focus was to combine her gender with her art. She shocked audiences and critics alike with her skilled characterizations of African Americans and women, and dramatized what she saw in society at large, including segregation. She lived in a society where blacks were not allowed to share white space - not allowed to enter through the same door as white people, drink from the same fountains, or even ride the same bus. This inhumanity fueled her writings. Her plays include Florence, Gold Through Trees, Trouble in Mind, Wedding Band, A Love/Hate Story in Black and White

, and Let's Hear It For the Queen

She also wrote three novels for children, A Hero Ain't Nothing but a Sandwich

and Those Other People