I checked out this show of photography at the opening a few days ago and spoke with the artist.

The shots were all done a few months ago in a kind of guerrilla photography campaign. "It was a three night 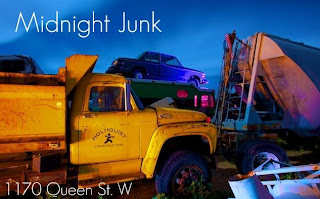 expedition out there," George says, "from 8pm to 2am in an old junkyard."

The junkyard owner was reportedly thrilled that anyone was taking an interest in his junkyard in the middle of the Mojave Desert, and provided entertainment in the form of car crushing demonstrations. It's clear, however, that the main focus was on image making in a very interesting process.

"Everything you see was taken in pitch black - with the shutter open for 8 minutes. We had time to move around, set lights."

At that shutter speed, it's even possible to walk in front of the camera without getting picked up, and it allowed George to set up a variety of lighting effects. There is one photograph of an old Volvo that he lit 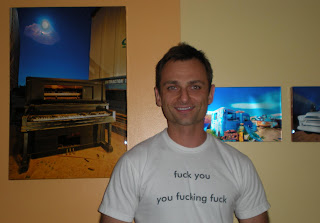 with continuous flashes of light with blue gels. The result gives the car a purpley glow. He lit a barn in the background with a flashlight intermittently so that it too glows from the inside. Finally, he illuminated the headlights of the Volvo by hand very carefully so that his hands wouldn't show.

All of the images have similarly luminous and atmospheric effects that give the show a real sense of presence, a sense of the inherent magic out there in the desert at night. He's compounded the effect by printing on silk and then applying meticulous coats of epoxy for a glassy finish that really accentuates the look.

Next time you're on Queen West, it's a good excuse to sample Cinnamon Girls menu while you check out the show.