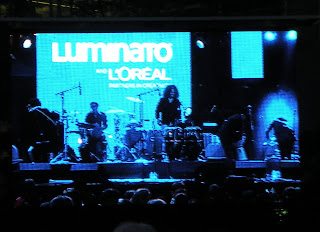 They say a picture's worth a thousand words, and in the case of two bands who defy categorization, I'd say that's true even more so. Luckily, I have moving pictures to say it for me.

Sultans of String, playing a piece inspired by the songs of West Coast whales. From their bio:

Yemen Blues, who combine Yemenite melodies and West African traditions with blues, jazz and funk. From their online bio:

YEMEN BLUES was founded 2010 by Ravid Kahalani, a rising star in Israel who grew up in a traditional Yemenite family. He learned the language and the traditional chants of his origin. Kahalani extended his influences in the areas of blues and West African soul, from the Sahara desert through classical Opera singing to Afro-American blues. He joined forces with Omer Avital, a well known bass player and composer from New York, and together they created YEMEN BLUES, a supergroup of top musicians from New york, Israel and Uruguay.

And how can you not love a band with a lead trombone??