Old-school rock rebels and musical elders from the desert. Terakaft brings together the raw sounds of
minimal indie guitar rock and the swaying pulse of Saharan journeys. They harness the energy of flirtatious 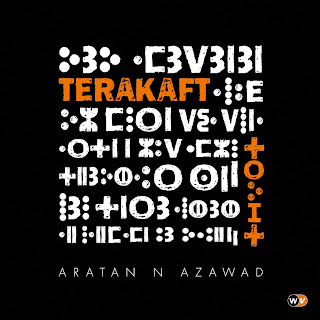 midnight songs and the gravitas of respected advisors calling for peace and unity.

. Drawing on traditional forms of this Saharan nomadic people, filtered through an utterly fresh take on blues and rock, Terakaft (“Caravan”) moves through Tuareg history and a sea of sand to take the plight of their people to the world—in angular guitar licks and pulsating grooves.

Based in Mali, the core of Terakaft got its start where it all started: with the boot camp blues that became a musical liberation movement. In hopes of liberating their denigrated, divided people scattered over five African countries, some Tuaregs turned to violence, gaining military and ideological training from the Libyans. But their casual, cigarette-fueled blues jams in between training sessions soon inspired a better way to shake up the Tuareg world: trade the machine guns for electric guitars, following in the footsteps of Bob Marley and John Lennon.

The resulting music sparked a revolution all its own, as young Tuaregs embraced the new sound, simply called “guitar” in Tuareg, and began taking ancient call-and-response poetic forms and making them rock. Terakaft leader Liya Ag Ablil (a.k.a. Diara) and the late Inteyeden (who like Diara once formed the core of Tinariwen) themselves began a new direction within that greater movement: They composed historical songs in the new rock style. Terakaft now embraces two generations of musicians and a body of music dedicated to the rich history and poetry of the Tuareg.

“Historically, our people had a huge territory that extended across the Sahara,” explains bassist and singer Abdallah Ag Ahmed. “But now Tuaregs are all living in despair and isolation, each in their own little corner of the world. We want to unite our people,” with rousing calls for progress like “Aghalem.”

Terakaft has perfected the songs that launched this desert rock rebellion, with tracks like “Aratan N Azawad,” which insists that children must study Tuareg language and history, which “is written in the mountains,” for there to be hope. Originally composed by Diara during the Tuareg rebellion two decades ago, Terakaft brings balance and quiet insistence to the song’s catchy melody and pared-down guitar solos. 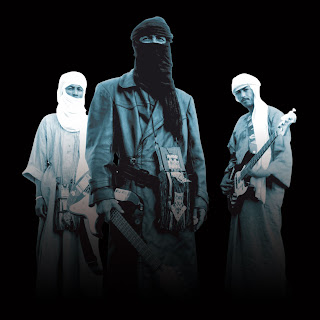 Terakaft’s vision of national unity and Saharan rock incorporates the rich heritage of Tuareg poetry and dance, blending it with the details of contemporary desert life. The brand image on a pack of Algerian cigarettes inspired “Akoz Imgharen” (“Four Patriarchs”), suggesting a council of wise elders for the four corners of Tuareg territory to Diara’s imagination. The lyrical “Idiya Idohena” is based on iswat, the playful, sensual songs that accompany young Tuaregs’ midnight dancing. The song is traditional, but Terakaft singer and guitarist Sanou Ag Ahmed adapted it for guitar and voices (and a subtle patter of palms). 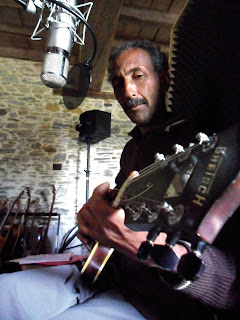 “We’ve just begun to work with musicians from other places, like the Indian singer Kiran Alhuwalia or a Celtic clarinetist we performed with not long ago in Angers,” notes Diara. “It was great to play with them. And we now tour with Matthias [Vaguenez],” a percussionist and fixture on the French world music and trip hop scene, whose thoughtful playing weaves throughout the album.

Increasingly familiar with and known to the world at large, Terakaft remains devoted to their desert heritage and to their ongoing hope of a united Tuareg nation. “I have to say,” reflects Diara, “there is nothing better than unity and peace.”