• The film will play in select cities throughout the summer, including Seattle, Portland, Chicago, Philadelphia, Houston and Miami.

New York - Film Forum is pleased to present the U.S. theatrical premiere of PASSIONE, directed by and featuring John Turturro. This wild, colorful, sexy ode to the music and people of Naples, was "rapturously

received" (Variety) and interrupted by "spontaneous outbreaks of applause" (Sight + Sound Magazine) in Italy, where it played for more than four months (its soundtrack on the charts for five).

When acclaimed actor-director John Turturro was invited to make a film about Neapolitan music, he was intrigued and  traveled to Naples to meet the artists living and working there. He was utterly blown away by the abundance of talent he found, and what was meant to be a straightforward documentary quickly transformed into a wild fantasia. 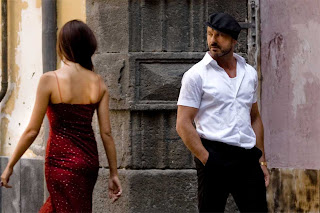 opens in New York on June 22nd and will play in select cities throughout the summer, including Seattle, Portland, Chicago, Philadelphia, Houston and Miami.

"Napoli is one of those places where after fresh air, food, and shelter, music is an essential ingredient for the survival of the people," says Turturro.  "The performers are not just singers in the film, but storytellers.  The talent I encountered was surprising, inspiring, generous, and moving."

The artists range from Mina, a fixture of Italian pop music since the '60s, to Spakka-Neapolis 55, whose songs have been heard in "The Sopranos"; from Fiorello and Massimo Ranieri, two of Italy's most beloved entertainers, to M'Barka Ben Taleb, one of today's most important Tunisian singers; from actress- 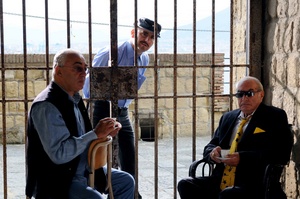 singer Angela Luce, who appeared in the films of Pasolini, Visconti, and Zeffirelli, to Max Casella, an American actor of Neapolitan ancestry who appeared in "The Sopranos" and starred on Broadway in "The Lion King" as well as off-Broadway with Turturro in "Souls Of Naples."

Performing the title track is James Senese, a master saxophonist with a heart-rending voice.  Senese contributed to Pino Daniele's first records, and Daniele, among the most internationally successful Neapolitan artists (he tours with Eric Clapton in June), is heard with "Napul'e," probably the greatest contemporary classic of the Neapolitan tradition. 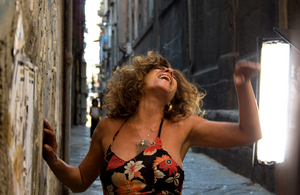 A brilliant actor in film, theater, and television, Turturro is also the director of three features (including the hilarious, irreverent ROMANCE & CIGARETTES, which premiered in 2007 at Film Forum) and a man whose talents are fueled by an unquenchable zest for life. He describes his new film as "a musical adventure that comes directly out of the people and the volcanic land they inhabit. Conjuring ancient stories and myths that still live - of love, sex, jealousy, and social protest - each song is a small screenplay, an emotional postcard. I tried to see if I could understand in a small way, a little bit of the soul of the city, while at the same time killing clichés about it. There are places you go and once is enough. Then, there's Napoli." 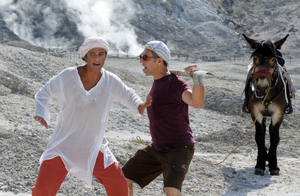