on July 09, 2011
From a media release - check out my interview with Thomas here:

Sim Redmond Band - (Set time: 9:45 PM)
Since their inception seven years ago, the Sim Redmond Band has been quickly on the rise, forging new ground in roots music. Traveling around the globe, playing with the likes of moe., the Neville Brothers, the Wailers, Jimmy Cliff, and Habib Koite, in some of the most beautiful venues in the U.S. and Japan, the world has taken notice. SRB's unique blend of roots-rock, Afro-Caribbean, and reggae music continues to spread like wild fire. They are based in Ithaca, NY but their magnetic pole is Africa, particularly the sounds emanating from West and South Africa.

Thomas Mapfumo and the Blacks Unlimited - (Set time: 10:45 PM)
Thomas Mapfumo and the Blacks Unlimited are a band from Zimbabwe. Influenced by traditional music (traditional instrument called the mbira, or thumb piano) from Zimbabwe and improvised with modern music, the band has come a long way. "Our music speaks for the people. We are influenced by the people who are struggling at home. Their voices have been silenced. Someone has got to talk." -Thomas Mapfumo (you can check out my interview with him here)

Thomas Mapfumo has been a witness to and participant in history in his native Zimbabwe. From the bloody years of the country's liberation war in the '70s, right through the present economic and political crises, Mapfumo has used his revolutionary, spiritually charged music to decry injustice and highlight the historical and cultural issues that underlie the news headlines. Mapfumo is a musical visionary and a fearless social critic and certainly one of the greatest African bandleaders of the past century.

By the summer of 2000, conditions in Zimbabwe had deteriorated badly, in part as a result of President Mugabe's aggressive and violent program of seizing white-owned farms. Mapfumo songs perceived as critical of the government were unofficially banned from state controlled airwaves, effectively, all airwaves. Feeling pressure on many sides, Mapfumo moved his family to the United States that year, and since then, he and the band have been spending much of the year based in Eugene, Oregon. 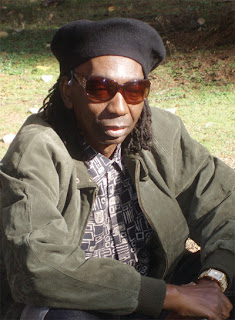 As the situation in Zimbabwe has declined steadily, virtually all Mapfumo's recent music has now been banned, and government-controlled press outlets have for the first time begun to write negatively about him. Despite growing risks, Mapfumo continued to return to Zimbabwe with the band to play traditional year-end concerts for as long as he felt safe doing so. However, he has not returned to Zimbabwe since 2004.