on July 12, 2011
I'll have an exclusive interview with Thomas Mapfumo tomorrow, in the meantime this: 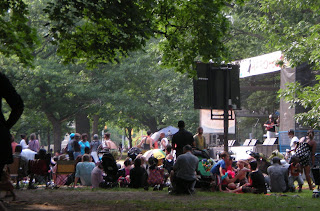 I was there almost all day on Sunday, leaving tired, dirty and musically blissed out.

Tich is a native of Zimbabwe, and you can hear that country's bright sounds in his original songs. He formed his band within a year of arriving in Toronto in 2008, developing his unique blend of Zimbabwe's traditional sounds along with modern pop. The Band is: Tich the singer-guitarist, Ruben Esguerra (congas and percussion), Tichaona ‘the other Tich’ Gombiro (bass), Larry Lewis (electric guitar), and Andrew Mark (drums and mbira), and he sings in both English and Shona.

This talented duo and the band got the crowd on their feet dancing, with a flurry of South Sudanese flags to celebrate the second day of that nation's existence. Ruth came to Canada as a student refugee via Kenya, and has released two CDs since then, impressing with her powerful and expressive voice and a warm stage presence.

JP Buse began his career singing as a student at the University of Zaire, later joining the legendary group Zaika. He's been in Toronto since 1991 introducing audiences to his infectious brand of rumba-soukous beats. It's impossible to resist, and the crowd couldn't help but dance en masse.

The son of a traditional healer, Dizu became obsessed with traditional percussion instruments from an early age, and with an earlier version of his band, played at the birthday concert for the then-imprisoned Nelson Mandela, at Wembley Stadium in London, England in 1988.

He became a professor of music at the University of Capetown, and went on to found a Ibuyambo, who perform worldwide. This was their Canadian début and the crowd was enthusiastic.

Thomas Mapfumo and the Blacks Unlimited

What can I say about Thomas Mapfumo that hasn't already been said? Musical innovator, thorn in the side of despots in his homeland, he's had a 40 year career with about as many album releases. I'll have an exclusive interview with him posted tomorrow about his latest, Exile, released in late 2010.

Here's a bit of gossip about Thomas' performance that night: two of the musicians in his band - guitarist and bass player! - were held up at the border, something he mentioned on the stage. As a matter of fact, fellow Zimbabwean Tich Maredza and guitarist Larry Lewis were enlisted, squeezing in a stress-filled rehearsal after their own set ended at about 4pm. (Thomas went on stage just before 9.)

Early in his set, Thomas actually apologized - bass is so key to the foundation of the music, it's such a huge gap to fill that he was even tempted not to go on stage. But, there was so much love for him in the crowd and they let him know about it with a roar of approval, people singing along with his classics. "That's what made it for us," road manager Drew Seip told me the next day. By the end of his set, he was smiling and dancing, visibly pleased by the crowd's warmth. "It was the most loosened up I've ever seen him on stage," Drew added. "You don't see that with American crowds. It must be something about the African community in Toronto." I think he's right. 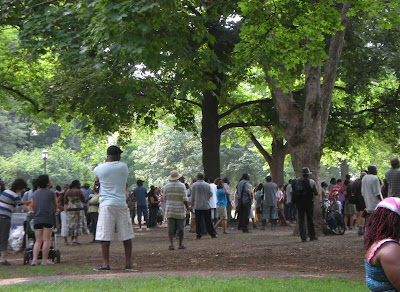