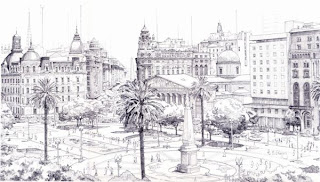 Next time you're on Queen West, you can add South American flavoured El Almacen Café to your list of gallery stops and take in the work of artist Hugo Slepoy. Hot tip - as you do, you'll want to try out mate, a kind of tea made from holly popular in Argentina, Brazil and elsewhere on that sunny continent, and some of their baked goodies.

Hugo's show is laid out in an eye catching progression (he told me he does a 3D simulation on computer so he'll know exactly what to hang where) from B/W pen and ink drawings of Buenos Aires at the front of the café, moving to coloured drawings and prints of Toronto midway and towards the back, where you'll find full colour felt pen drawings of birds. In a way, it juxtaposes Buenos Aires and Toronto in a way that flatters both.

You might call his style naïve overall, but his drawings and prints are meticulous in their detail, particularly of the ornate architectural elements, and it comes as no surprise to learn that Hugo's background does in fact lie in architecture. He graduated from the University of Buenos Aires with a degree in Architecture in 1972 and in Urban and Regional Planning in 1980. He's made Toronto his home for the last three decades, and previous experience includes a stint as a freelance illustrator for the Globe and Mail from 1991 to 1998.

That attention to detail gives the buildings a real presence, and some of the images include print outs that 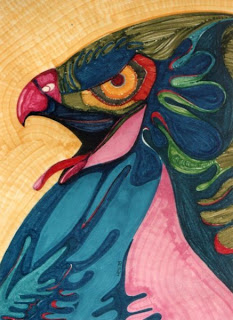 details the buildings and their history. Stand outs include his rendering of the Palacio Barolo - on a landmark building at 1370 Avenida de Mayo in Buenos Aires, and full colour drawing of Forest Hill village in mixed media. The original drawings are priced in the $400 to $2,000 range, with some of the prints of Toronto landmarks going for about $200-ish. Other Argentinian locales include Plaza Canada, Rond pont and Ortiz Basualdo Palace, with local landmarkslike the Rogers campus and venerable House of Lord at Yonge and Isabella.

The felt drawings of the birds at the back have a different flavour, bursting with colour and flowing lines in contrast to the regular architectural feel of the others. Even here, however, the lines are precisely drawn and feature eye catching patterning and movement. It's an interesting show and you'll probably want to check it out a few times as you stop by for mate.
architectural drawings latin american artist in toronto naive painting pen and ink drawings toronto artist visual arts