Balkans Meets New Mexico in A Hawk and A Hacksaw - Summer 2011 U.S. Tour

A Hawk and A Hacksaw Take a CERVANTINE

Route to Another Place and Time

• You'll find their tour dates at the link, beginning July 21 in New Mexico and including September 29 at DROM in New York City and October 4 at the Red Palace in Washington DC

A broomstick and duct tape. That is what the curious Americans used for a mic stand. In a humble house with no running water deep in the Romanian hinterland, they were recording with Fanfare Ciocarlia, one 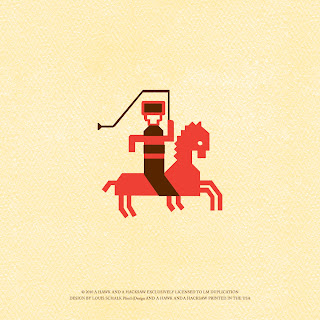 of the world's top brass bands. A Hawk and A Hacksaw have also found themselves playing with Roma on the streets of Amsterdam and out on the Jaffa road, performing to both Hassids and Palestinians; in a sculptor's tree house outside of Budapest; and at a Jewish wedding in Pittsburgh where a young boy stared transfixed at the band, ignoring the party revelers, until-with no explanation-tears streamed down his face.

Check out the music that elicited such emotion as A Hawk and a Hacksaw tour the US starting in late July in Santa Fe, wending through the Midwest to the east coast, hitting Chicago, St. Louis, Baltimore, New York, and a stop in Asbury Park for All Tomorrow's Parties.

On first glance, the desert mountains of New Mexico don't seem like an obvious home for a band that specializes in its own blend of music from the former Yugoslavia, Greece, Turkey, and Romania. But there is more to the connection than the untrained eye can see. On the album's title track, the group explores the mariachi influence on Romany brass that flourished thanks to the Latin American soap operas popular across Eastern Europe. "Europeans inspired Mexican brass and now Mexican brass inspired Europeans," says band founder, accordionist, and percussionist Jeremy Barnes. "In New Mexico , we grew up hearing 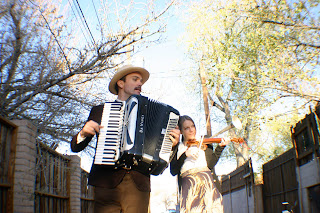 all this brass music, hearing mariachis."

There is something connecting what may seem like distant points on the map: The Balkans and New Mexico, thanks to an odd tie Barnes and band mate and violinist Heather Trost felt on their travels. "Northern New Mexico is a beautiful ecosystem of cultural clashes and mixings, that really remind us of the Balkans and Transylvania," says Trost. "There are very few 'cultural climates' like this in the world, and I think it's something we try to reflect in our songs."

Whereas other American groups are simply "from the U.S.," when AHAAH tour in Europe, they are often promoted as being from New Mexico. Many Europeans think that New Mexico is its own nation, and sometimes I wish it was. It often feels that way," says Barnes.

While the music comes off sounding rooted and traditional, the treatments simultaneously evoke specific places while bending time. AHAAH uses an old two-track recorder to give their recordings a timelessness; suggesting a historic feel deep in memory, even though the compositions are new or arranged in entirely new ways.

When AHAAH play big cities like New York, expect to see a cross-section of Central and Eastern Europe represented in the audience. The Turks will sing along to the classic song "Uskudar," whose melody has traveled from country to country, so others will hum along too. "It turns up in Greece, in Bosnia, and elsewhere. And as a Klezmer tune, it's called 'A Terk in America,'" says Barnes.

A Hawk and a Hacksaw have never been about ethnographic reenactment or folk purity. "We want people to explore further after they hear us," Trost reflects. "We're doing what we love, and we want people to like it on its own terms. People are hungry for things beyond Western pop and we are a part of that exploratory process."