The first of the cyber-Mohicans hits the stage, shredding like a rock star on a touch-screen tablet melded

with a Guitar Hero controller-and creating a huge chorus of Brazilian rhythm. With a three-foot tall Mohawk and the blessing of the spirits, he and his crew invent new instruments for ancient roots: the rumbling joys of Afro-Brazilian beats, the rolling pulse of samba, and the deep presence of candomble.

PMN's sound sparkles with laser-sharp solos played on apps and with a resounding pulse coaxed out of re-imagined Northeastern Brazilian drums. There are hints of Herbie Hancock at his funkiest, of prog rock panache. But the group's roots go deep into Brazilian life: the samba schools of Salvador, the wisdom of candomble masters, the lighthearted and lightning fast bursts of repentista-style vocals. 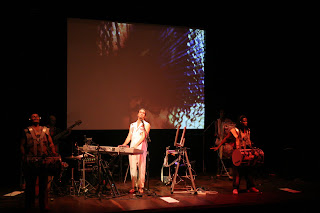 Mercury, worked on soundtracks for high-profile film releases (like the recent animated romp Rio), and even toured with The Scorpions. But when Mutti was alone in his studio, he found himself tinkering. He wound up inventing new ways to play ancient beats.

"Shogun"-a shout-out to ancient Japan and to the Afro-Brazilian gods of justice and battle, Shango and Ogun-harnesses the power of Bahia's rhythms as Mutti's hands flicker over a touch screen and lush melodies ripple. "Sambo Differente" interweaves Bahia's laidback version of samba and Rio's harder-hitting version in a flirtatious sway between passion and doubt. "Caranguejo" playfully turns the name of a jaunty crab into a polyrhythmic spree driven by the tongue-twisting rhythm of rap's rootsy cousin, repente.

The deep grooves, engaging melodies, and surprisingly poetic lyrics of Percussivo Mundo Novo came to Mutti though dreams, experiments, hunches. He started out transferring samples from the keyboards he was familiar with to video game controllers, just to see what would happen. Then he added wireless technology, grafted in a touch screen, and started to make music using cheap and cheerful apps. He relished the challenge.

"My question was, 'Can you play Brazilian percussion with that crazy stuff?'" Mutti explains. "You can't get a perfect imitation, but it's possible to make it sound 80 percent right, so I started to play with these controllers. It was very hard at first, but it helped me reach a frontier that I had never reached before."

Mutti didn't just stick to joysticks. He teamed up with some of his percussionist cohorts and his do-it-all sound tech, and redesigned Bahia percussion instruments to make new sounds. Together, they whipped up a giant double-headed drum with two different tunings, complete with its own integral wheelbarrow. They merged a traditional tenor tom and a bass drum and humorously dubbed it "The Submarine." They turned the conga-like timbau on its side and added a dash of Cuban batá drum.

Mutti started recruiting friends from the Bahia music scene-veteran percussionists, top studio players-to give his inventions a whirl. "I told them I was developing a way to play with controllers. They went crazy," Mutti recalls with a chuckle. "They thought I was joking, but they gave it a shot. I could play exactly what they were playing. They knew I was serious."

They debuted at an Afro-Bahian street party called a lavagem, or "cleansing," in the famous beachside neighborhood of Itapua where Mutti had grown up. "I kept hearing a voice, something that said I had to get this group to play at this party," Mutti recounts. "When I went to the candomble house to ask them what this 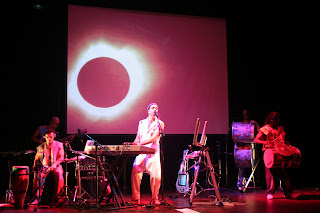 meant, what was happening, the masters said, 'You have a signal, and you have to respect that. Put this group on the street, and you're going to have some cool things happen.'"

The cool things included continued inspiration guiding the group's distinct live aesthetic, a vibe that flows between cyberpunk and ceremony. Effortlessly yet utterly committed, the players rock and leap with a spark that belies the group's astounding precision. The sheer energy could get even the most staid audience dancing.

Percussivo Mundo Novo has its own look as well. The band's polychrome, tropical feel could be equally at 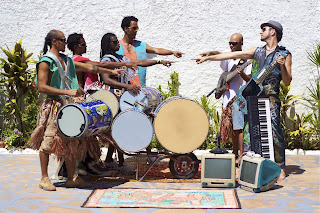 home in a hipster bar or on the streets of Northeastern Brazil. Like everything PMN does, it's about more than just surface style: Reoccurring dreams of a Mohican spirit guide suggested Mutti don a towering Mohawk-style headdress while jamming on a Play Station controller.

All this comes from an essential, dynamic tie between the deep past and powerful spirits of Northeastern Brazil, and the thrilling opportunities for new expression Mutti found when he started repurposing electronics. "For me, the group, as you can tell from its name, is about creating a new world without forgetting where we came from," Mutti reflects. "We can look to future without losing the past, and look to the modern without losing our roots."