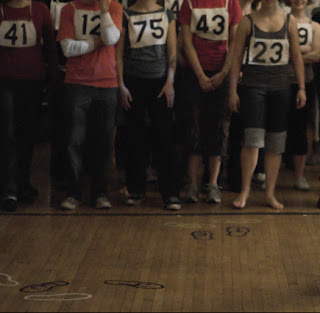 Dance Marathon is an interactive, duration-based performance event inspired by the desperately competitive and physically grueling spectator sports of Depression-Era North America, with a nod to today's cult of celebrity and more than a little hint of reality TV. Audience members participate and dance-off with bluemouth inc. members under the direction of floor judges and the merciless movement of the clock to help shape the theatrical experience, or they can sit back and enjoy the fancy footwork.

Performances integrate movement, text, live music, video and, of course, competitive audience interaction. With only nine performances (Aug. 3-14) and a number of special guest star appearances scheduled, Dance Marathon is considered one of the “hot tickets” at the 2011 Edinburgh Festival Fringe. The Guardian (UK) named it a “critic’s pick” on Monday, July 18, one of only five theatre recommendations.

• For more information visit the link.

Harbourfront Centre’s Tina Rasmussen, Director of Performing Arts and Artistic Director of World Stage comments, “I am proud to be co-producing Dance Marathon at the premiere Fringe venue in Edinburgh, the Traverse Theatre. It’s an exciting development for Harbourfront Centre to be bringing a work to the largest art market in the world. Championing Dance Marathon has been a labour of love. As a contemporary performance piece, Dance Marathon is a collaborative show that relies heavily on its collaborators and our colleagues at the Traverse and The Lyceum have really embraced the ethos behind the

piece and there is a lot of buzz and excitement to be presented alongside some of the most exciting artists creating today.”

Since its inception in 2004, Fresh Ground new works has been a catalyst for new Canadian multidisciplinary artistic creation. It stimulates the creation of new cross-disciplinary works, providing financial support for innovation, creation and excellence. Through open national submission calls in 2005, 2007, 2008 and 2009, Harbourfront Centre has awarded over $400,000 in prize money toward 19 new Canadian commissions.