SPENT
The critically acclaimed, Dora award-winning comedy about the financial crisis returns to the Young Centre, Toronto
July 21 to 29, 2011

Toronto, ON (July 2011) – Before taking on the Edinburgh International Fringe Festival this August, the hilarious and provocative SPENT will play one final time in Toronto as a fundraiser for Edinburgh. A blend 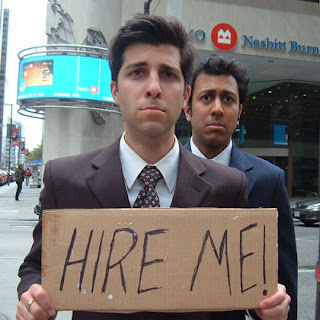 of physical comedy, absurdist humour and biting satire, SPENT will play for a limited 6-show run at the YoungCentre for the Performing Arts, July 21-29!

On September 15, 2008, two high-powered executives went to sleep with their hopes and dreams tucked safely in the bank. The next morning they woke to find everything gone. Was it a dream or a nightmare? It was most certainly a crisis. SPENT is a fast paced, intelligent and poetic commentary on the greed that caused the financial crisis, and the media that sensationalized it. In a comedic tour de force, two actors play over thirty characters, including CEOs, down-and-out bankers, media pundits and down and out traders who have lost everything.

SPENT is an exceptional piece of physical theatre first produced for the Toronto Clown Festival, where it was the best-selling show at the festival. It went on to have two hugely successful sold out runs at the Factory Theatre and was nominated for several Dora Awards including: Outstanding Production, Outstanding New Play and Best Performance by an Ensemble in a Featured Role, for which it won. This past February SPENT was the runaway hit at the Undercurrents Festival in Ottawa. 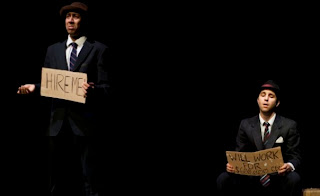 Written by Michele Smith, Dean Gilmour, Ravi Jain and Adam Paolozza, SPENT is a co-production between two generations of Toronto’s finest independent theatre companies. Regarded as “masters of original creation theatre”, Dean Gilmour and Michele Smith (Theatre Smith-Gilmour) have occupied an essential place in the landscape of Canadian theatre since 1980. Ravi Jain (Why Not Theatre) and Adam Paolozza (TheatreRUN) have been recognized as the next generation of exciting and physically innovative theatre creators by their peers, critics and audiences alike. (photo by Elisa Gilmour)

SPENT is relevant, topical theatre and speaks in an immediate way to a piece of history that is still unfolding and affecting people all over the world. Don’t miss your final chance to catch the funniest show Toronto has seen in years.