Music Outdoors: A Stellar Line Up at the 2011 Hillside Festival in Guelph

on July 18, 2011
They've got Emmanuel Jal, Seun Kuti & Egypt 80 and much more coming to Guelph this weekend - jealous that I won't be able to make it. From a media release:

Guelph, ON - Hillside Festival (July 22-24, 2011; www.hillsidefestival.ca) runs ahead of the curve. They've booked band after indie band right before the group made it big. They focused on the 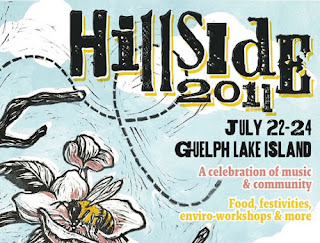 The Arcade Fire organized a mass sing-a-long and impromptu parade for their first Hillside appearance. Feist, Stars, and Broken Social Scene cut their teeth in its tents. Barenaked Ladies were so enamored with their Hillside experiences over the years that they helped the Festival build the permanent garden of plants that forms the Mainstage roof. Final Fantasy jammed with their folk idol Buffy St. Marie.

With its indie vibe, Hillside channels the cool college-town energy of nearby Guelph, Ontario, but lets artists and concert-goers cut loose from the everyday world. Held on an island in the middle of a reservoir and wooded nature preserve, there is no sign of urban development visible from the site. "The island," explains artistic director and long-time Festival devotee Sam Baijal, "is the perfect symbol for the Festival. When you walk through those gates, you feel you are really getting away from it all."

This refuge makes for open-minded audiences and for performers eager to hang out and have a good time. "Bands walk out on stage, and even though no one has ever heard of them, they'll get an amazing response," Baijal relates. "Our audiences come without preconceived notions. They'll buy tickets before we've even announced our lineup. They want to be challenged." 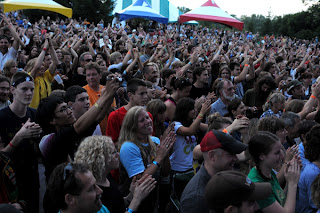 Challenges come during the festival's workshops: unexpected pairings of artists tossed together on one stage for a madcap jam session. Though once upon a time, Hillside made these matches by pulling names out of a hat-they were even called "hat bands"-now programmers curate performers who would never have jammed otherwise. Twenty-two musicians joined reggae legend Burning Spear to chant down Babylon one year during the festival, while Calexico and members of Los Lobos rocked out together another time. "You can't buy or plan that kind of spontaneity," Baijal explains. "These things just happen here."

Alongside the commitment to adventuresome music is an equally important commitment to the environment. Hillside has been recycling seriously since the '80s and has used solar power to run events since the early '90s. The festival has stopped allowing plastic bottles, bringing in water trucks, not only to avoid waste, but "because the festival feels water should be complimentary to all," Baijal notes.  And you won't find Styrofoam or plastic disposables on the island: Food is served on dishes that are washed by hundreds of volunteers.

Though hip, Hillside keeps it homegrown, right down to refusing all corporate sponsorship: You're likely to catch seniors raving about how they loved the beatboxer they just heard, or see kids sliding through mud puddles. There is hand drumming, a First Nations circle, and spoken word performances. Festival fans practice yoga or get goofy citations from a self-appointed, tongue-in-cheek fashion policeman.

"People always ask me, 'Why isn't it like this year-round?'" Baijal smiles.