Review: To See the Mountain and other stories - 2011 Caine Prize for African Writing

on July 27, 2011
Review: To See the Mountain and other stories
2011 Caine Prize for African Writing

Books are available direct from the publishers or from the Africa Book Centre, African Books Collective or Amazon 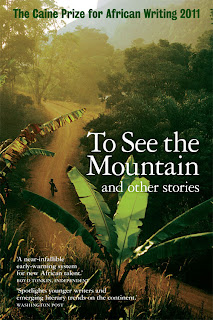 I have the Canada Post three week long strike and a busy schedule to blame for the fact that I'm only posting this review this book now, a couple of months after its release. If you want to know about modern Africa and Africans, or you're just a fan of a well crafted short story, then this book is a must have.

The 2011 Caine Prize for African Writing went to NoViolet Bulawayo of Zimbabwe for her story Hitting Budapest, originally published in the Boston Review (Nov/Dec 2010 issue), and To See the Mountain includes the four runners up along with the stories from the participants of the annual Caine Prize Writers' Workshop, held this year in Cameroon. The participants also feature last years' winner, Olufemi Terry. As a whole, the stories run a gamut of styles and approaches from more traditional narratives to edgy urban and visceral.

The prize winner, Hitting Budapest, falls into the latter category, a raw tale of hungry children marauding through a rich white neighbourhood in search of guavas.

Budapest is big, big houses with the gravelled yards and tall fences and durawalls and flowers and green trees, heavy with fruit that's waiting for us since nobody around here seems to know what fruit is for.

Every detail here is telling - the soft, pretty feet of one of the neighbourhood's inhabitants, the way she unthinkingly throws away a half eaten pastry that the children eye, incredulous. In a way that hits you where you live, it's look at the vast gulf that separates two worlds that exist, in reality, side by side. NoViolet (pictured below) writes with a piercing clarity about the conditions that engender a stunningly casual cruelty on both sides.

Another highlight of the collection is the story Bridge by Nigerian writer Jide Adebayo-Begun, one of the 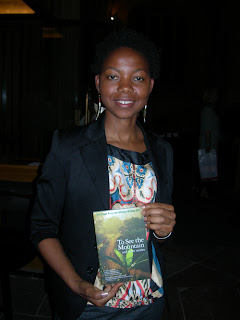 workshop participants. It's lyrical and eloquent, and beautifully evocative of the chaos, the spirituality and tragedy of Lagos.

Thunder rumbled overhead like an empty stomach; a drizzle started. But it didn't bring coolness, just a liquid accompaniment to the sun, the kind of rain the folks on his street in Ijebu-Ode would describe as "the lion is giving birth".

Other selections include murder mysteries, stories about child soldiers and one, the title story, not surprisingly about participants in a writing workshop. All are steeped in the social and sensual realities of the African continent, bringing it to vivid life. In Shadreck Chikoti's Child of a Hyena, a Malawian and his Danish wife come home to his village to discover a devastating family secret, while Alex Smith's Wolf Blue uses a fragmented narrative to weave a clever cop story.

The book ends with Dark Triad by last year's winner, Olufemi Terry of Sierra Leone, an abstract kind of narrative about a dinner party of African ex-pat academics and artists in Europe that resonates with the confusion of displacement.

The Caine Prize anthology has come to be a showcase for younger African writers, many of whom have gone on to publish novels and other works in establishing their subsequent careers. It's a strong collection and I'll join the chorus of voices who see it as a precursor of even greater work to come from this next generation.
African writers caine prize for african writing english language writers short story anthology