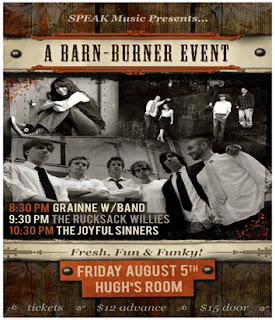 TORONTO – Rustle in the crowd and bolt the barn door shut! It’s going to be a hot night of music at Hugh’s Room. Nowhere will you find such an exciting trio of bands playing in one venue on the night of Friday, August 5th. Three of Toronto’s most dynamic up-and-coming groups GRAINNE, THE RUCKSACK WILLIES and THE JOYFUL SINNERS take the stage for a thrilling musical ride ranging in styles from catchy roots/pop to hillbilly heaven to sinful soul, blues and glorious gospel.

GRAINNE RYAN
The first thing you need to know about Grainne is how to say her name and what it means. It's pronounced grawn-ya, it's an old Irish name and in English it means Grace. Grainne has “graced” us with her 3rd EP Looking For Sunshine (produced by Moe Berg), which was released on November 26, 2010.

Eric Thom writes in a recent Roots Music Canada review, that Grainne’s music is “reminiscent of Lucinda Williams and a slightly rebellious Mary Chapin Carpenter.... her original compositions are instantly familiar-sounding, hook-laden songs that encourage you to kick up your feet and, in some cases, sing along.”

THE RUCKSACK WILLIES
Fresh from a highly successful run at the Mariposa Festival stage this summer, the Rucksack Willies were described by Self Serve Gas Station blogger as "a mix of country/rock/bluegrass/folk/Gin Joint ....and dirty bluegrass..." They are all of that and more.

Formed in 2008, the band has since become a tour de force of old-style country stomping with a solid injection of endless original material from the undeniably charming lead vocalist Angela Hilts. Band members Hilts (vocals, banjo), Megan Thomas (vocals, washboard), Galen Pelley (drums), Lucas Gadke (upright bass, vocals), Matt Bailey (guitar, harmonica) and Michael Eckert (dobro, pedal steel) have been enthralling Ontario audiences for the past three years, garnering a reputation for having one of the most energetic stage shows in the Golden Horseshoe and beyond. Their soon-to-be-released debut CD Letter To Anne, produced by Michael Eckert and engineered and mixed by Reuben Ghose, skillfully presents the full force of the Willies’ live show with the help of guest musicians David Baxter, John Williams (clarinet), and Laura Bates.

THE JOYFUL SINNERS
This is a band that not only plays well-written and hook-driven original songs in the style of roots, blues, soul and gospel music, but are also all very capable and seasoned musicians. Despite all members being under the age of 26, they have already shared stages with many well-respected Canadian artists including Matt Dusk, Ron Sexsmith and Luke McMaster. The sky seems to be the limit for the Joyful Sinners (who have only been playing together for less than two years!). The group recently released their debut four-track EP What You Need

to a packed crowd at Mitzi’s Sister. With punchy horns and sassy backup vocals the band performs regularly around town, but don’t take it from me, one must see them live to truly experience what it's like to be a "Joyful Sinner."

“Upbeat and hearty, their music demands your attention and you can’t help but shimmy-shake a little while sippin’ on your rye and ginger. They’re smooth, they’re soulful, they’re even as the name suggests: joyful” ~ C. Roberts (The Mushy Pony)