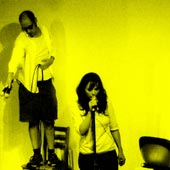 Six years after their first collaboration Jacob, Ame and Chad return to the show they love and nobody saw.

In 2005, unbeknownst to almost everyone, theatre and dance artists Ame Henderson, Chad Dembski, and Jacob Zimmer spent a summer in Hub 14 making a play. Six years later, after more than a dozen shows and national and international tours, they return to spend another August at Hub 14.

Perhaps in a Hundred Years is a tender science fiction story about three friends stuck in outer space, waiting for the future to arrive. They tell stories, sing songs, pass notes, and try to answer some questions about communism, candy bars and parties. Dancing, lip syncs and quiet beauty fill the space.

Our heroes are surprisingly optimistic, given the conditions outside, armed as they are with cheerful pop songs and more than a millennium worth of utopias.  Despite an almost overwhelming pessimism for the long term future, which many of us share, Perhaps in a Hundred Years endeavors to keep it upbeat, or at least tenderly, militantly, hopeful.

Broadcast #1
We are in space. That much is clear. We seem to have forgotten how we got here. Or perhaps we never knew. We don’t know if we are on our way to some distant planet, or on our way home. We don’t know what year it is, or how many have passed. Perhaps a hundred, perhaps more. So we speculate. We consult palm readers and the bottoms of vodka bottles. We don’t remember who we were before. I think I may have been a printer. Chad has a hunch he won the Tour de France seven times after a bout with cancer. Ame is still undecided, but suspects she left children behind.

Perhaps in a Hundred Years mixes space-rock show with confessional, talk show with theatre to create vital performance for the future.