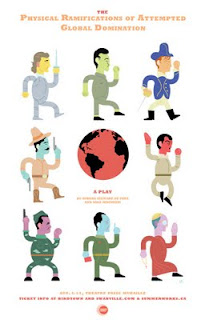 Hitler foamed at the mouth, Napoleon suffered from extreme eczema and every so often, Pol Pot would go blind. In exploring the mysterious and bountiful medical ailments suffered by many of history's most aggressive global dominators, the girls of Birdtown and Swanville are on a mission to find out what it's like to be one of the men in charge of the massacre in The Physical Ramifications of Attempted Global Domination.

A set made of balloons and filled with party supplies sets the stage for eight dictators to battle it out in competitions of physical strength and fortitude, tests of wit and balloon crushing races. This latest work from Birdtown and Swanville (the company whose 36 Little Plays about Hopeless Girls garnered critical acclaim at the 2009 Toronto Fringe Festival) explores the mysterious and bountiful medical ailments suffered by some of history's most

aggressive dictators, and attempts to get under the skin to probe the pitfalls of political fortitude.

With tyrants around the world being brought to account by their own people and international courts, the company has chosen to continue the exploration of dictators such as Napoleon, Pol Pot, Idi Amin, Hitler and Chairman Mao that began as part of Harbourfront Centre's HATCH program in 2010.

Played by a stellar ensemble of female performers, eight men known for regimes of terror are pitted against one another in an eccentric competition that highlights their curious eccentricities and seemingly endless stream of psychological and physical ailments. 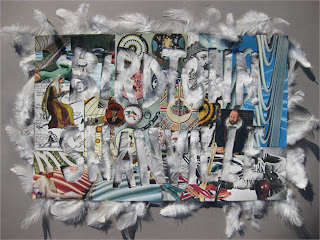