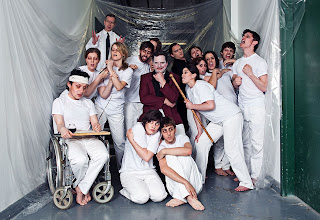 Jean-Paul Marat as Performed by the Inmates of the Asylum of Charenton Under the Direction of the Marquis de Sade). This dark and unflinching show - packed full of madness, melody and Machiavellianism - is sure to be a highlight of Toronto’s summer theatre season!

Marat/Sade paints a critical picture of the French Revolution and its unbridled violence through the eyes of eccentric nobleman, sexual deviant, and prolific author, the Marquis de Sade. Using a play-within-a-play structure based in historical fact, Marat/Sade is set in the Charenton Asylum where, as an inmate, the Marquis was permitted to write and mount dramatic works using his fellow inmates as actors, and to perform the completed pieces before audiences of French Aristocrats.

When De Sade presents his latest and most controversial work to date, a dramatization of the momentous assassination of writer and fervent revolutionary leader Jean-Paul Marat at the hand of young and 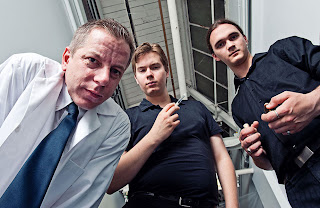 comely idealist Charlotte Corday, his incendiary script inspires and energizes the motley cast of inmates. Despite the asylum director’s attempts to quell the situation, the polite proceedings devolve into an anarchic melee of wit-laced debate, hedonism, and animalism that threatens to bring the whole institution crumbling down.

In keeping with Soup Can Theatre’s mandate of reinterpreting classic works for a 21st century audience, director Sarah Thorpe has stripped Marat/Sade of its early 19th century mise-en-scene and placed it in the world of McGill University’s Psychiatry Department, circa 1957. It was there that Dr. Donald Ewen Cameron, the first chairman of the World Psychiatric Association, performed psychologically torturous experiments (including the administration of high voltage electroshock, sensory deprivation and hyper-stimulation, hallucinogenic agents, and paralytic drugs) on unconsenting patients. These experiments were performed under the umbrella of MKULTRA, a covert CIA operation which sought to explore the possibilities of mind control, memory erasure, and involuntary information extraction. The contextual and thematic parallels between Marat/Sade and this dark chapter of Canadian history will undoubtedly make for a stirring and thought-provoking audience experience. 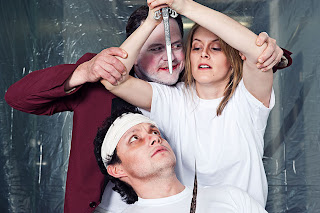 In an effort to avoid stereotypical and insensitive depictions of the mentally ill (while still maintaining the energetic spirit of the source material), each “patient” has been assigned a medically recognized mental disorder appropriate for their character, and has been encouraged to inform their performance based on that disorder’s behavioural symptoms.

Marat/Sade marks Soup Can Theatre’s return to the stage after their Kurt Weill inspired cabaret show Love is a Poverty You Can Sell took the 2010 Toronto Fringe Festival by storm - selling out nine of eleven shows, garnering four and five star reviews, and being selected to be a part of the coveted ‘Best of the Fringe’ series at the Toronto Centre for the Arts. 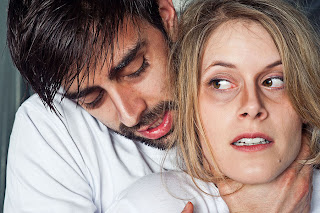 Marat/Sade
• Dates and Times: July 19th to 23rd at 8pm. July 24th at 2pm.
• Venue: Alumnae Theatre Mainspace. Located at 70 Berkeley Street near King and Parliament.
• Tickets: $15 for all seats and performances.
• Available at MaratSade.ca or at the venue box office starting one hour before each performance.

About Soup Can Theatre: Soup Can Theatre is a Toronto-based theatre company dedicated to reinterpreting classic theatrical works for a twenty-first century audience. Founded by Artistic Director Sarah Thorpe and Artistic Producer Scott Dermody in 2008, Soup Can Theatre’s aim is to produce theatre that is accessible yet challenging, and to present established material in a new light by setting it within a contemporary and socially relevant framework.