[Toronto ON]  The Little Stevies have landed!   Australia’s folk-pop darlings are winning Canadian hearts, eating poutine and hitting stages from Montreal, Toronto to Vancouver and all points in between! 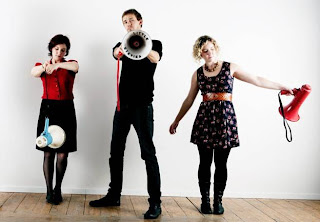 If someone told you The Little Stevies were here from Australia, what would you think?  ‘What is a Little Stevie?’ might be a good start.  Two Melbourne-born sisters, Sibylla and Bethany Stephen, would be two thirds of the answer. These two siblings sing and harmonize their beautiful voices in a way that could only have happened genetically. Joining together with friend and bassist, fellow singer/songwriter Robin Geradts-Gill, the three formed their highly harmonized alt-pop band two albums ago.

(distributed by 45 Records/Universal), proves to be an unnecessary call-out – as its quirky, melodic brand of folk/pop grabs your attention immediately. Hooks abound as songs like “Sunshower” and “Love (Love Love Love)” draw immediate attention to their vocal powers while the tightly-produced instrumentation proves the perfect complement to their sound.

The three of them are making their inaugural Canadian tour, supporting themselves entirely on guitars, bass and ukulele (plus a talented, Aussie-Canadian rent-a-drummer in Chris Altmann), bringing their studio work to life so effortlessly as to always be as surprising as it is satisfying.

Slightly irreverent and tending towards spontaneity in their stage banter, all three players are clearly having a wonderful time adopting Canada as a second home and, accordingly, their fresh approach to 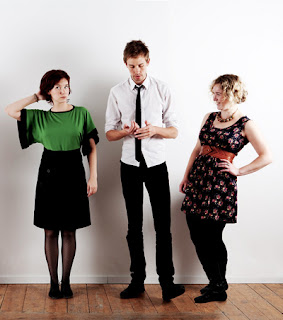 composing and performing their original work is earning Canadian fans in the time-honoured tradition of selling themselves live.

The wide range of material – from the uke-driven “The Day We Went Away” to the mellow grooves of “Accidentally” to the slightly funky “Feel It” – demonstrate their abilities as a band to create complex little jewels out of everyday observations and feel-good scenarios befitting their youthful perspective, their upbeat attitudes and good ol’ quirky fun. Yet it’s their collective, buoyant delivery that captures your ear and steals your heart while darker tales like “No Button” or the heartfelt, semi-autobiographical “Sister” reveal a beyond-their-years depth that underlines great promise.

The Little Stevies are not only coming to a stage near you – they’ve already arrived.