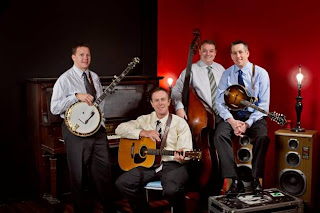 Anyone who’s been to Canada’s east coast has some grasp of the calibre of those who call it home. Maritimers are all about home –  and family – and Allan and Rick Spinney, who hail from Wolfville, Nova Scotia, have been celebrating what this means since they first performed together in 1992.

Originally from Hamilton, both boys moved with their family to Nova Scotia at an early age, growing up in the rich farmland of Annapolis Valley while gravitating – musically – to the sounds of Bill Monroe, Flatt & Scruggs and Smiley Bates. Allan first picked up a guitar at age 6, while brother Rick complemented this move with his first banjo years later. Their study of traditional bluegrass progressed as the two siblings worked hard to develop a distinctive sound.

And, in the long-lived bluegrass tradition of the blending of sibling brothers’ vocals, the Spinneys join great bluegrass brothers – the McReynolds, the Monroes, the Stanleys and, more recently, the Gibsons – as they embellish their homegrown sounds with the addition of strong players in Gary Dalrymple (mandolin) and Darryl Hebb (upright bass).  Theirs is an authentic bluegrass sound paying heed to the past as it celebrates the genre with a fresh approach leaning on heavenly harmonies, prolific picking and strong originals that honour their roots.

Recently inducted into the Nova Scotia Country Music Hall of Fame, the Spinneys join the ranks of Hank Snow and Wilf Carter as they continue their path of playing the music that destiny has chosen for them. That their joyful-sounding fare transforms each audience member into lifelong fans is icing on the cake.

The Hugh’s Room crowd is sure in for one sweet night!