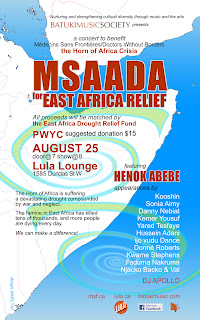 • 100% of proceeds of the Msaada concert to benefit the Médecins Sans Frontières/Doctors Without Borders Horn of Africa Crisis Campaign.
• All donations will be matched by the Government of Canada's East Africa Drought Relief Fund.

A wide swath of East Africa that includes Kenya and Ethiopia has been hit by years of drought, and regions of Somalia are suffering from the worst famine in 20 years, over 3 million people starving. Years of conflict in southern Somalia have exacerbated the emergency, preventing aid agencies from helping communities in the area. Thousands of Somalis have fled mainly to Kenya and Ethiopia, with many dying during the journey.

Your donations are valuable. We have a real opportunity to save lives through emergency relief efforts in Somalia, Kenya and Ethiopia. Our hope is that Canadians will learn more about this crisis and donate funds to help those in need. Every dollar counts.