Ethiopian Funk is Only the Beginning: Debo with Fendika at Lincoln Ctr Outdoors August 11 in NYC 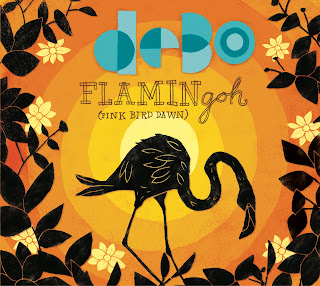 “They lifted the band off the stage,” exclaims Danny Mekonnen, the Ethiopian-American founder of Debo Band (deboband.com), recalling the group’s first moments performing with the Ethiopian dancers and musicians of Fendika.

“From the first entrance, they just elevated the band,” reflects Mekonnen. “It’s the kind of thing you can’t hear directly on the recording, but that energy is there.”


***
Debo began learning “Belomi Benna,” a hard-grooving classic with soaring bursts of brass and insistent bass, in the dark cold of a Boston winter. Mekonnen, who grew up listening to his émigré parents’ extensive 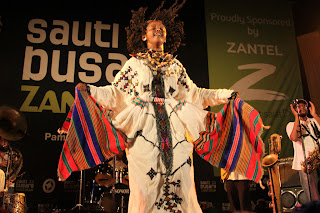 “’You’ve never seen these guys in Fendika,’ I told the band,” Mekonnen remembers with a smile. “They are going to kick butt up there.”

Then Debo arrived in Addis Ababa, in a nightclub filled with local elites. Fendika’s veteran dancer Melaku Belay and his colleagues leaped into action. Everything fell into place.

Belay and colleagues have found the right mix of roots and edge, of innovation and showmanship, right down to vibrant costumes recalling Ethiopia’s many regional traditions. And their presence takes Debo’s hard-swaying jams to new places. Along with the powerful, nimble voice of Fendika’s Selamnesh Zemene and effortless intricacies of drummer Asrat Ayalew, the dancers’ intensity pushes the band to new heights. 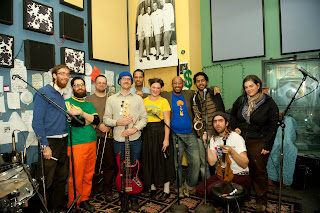 The synergy flows from the two groups’ shared ideas and creative chemistry. When Mekonnen first met Belay for coffee at an Addis Ababa café, they clicked instantly. The young man from America and the Addis Ababa native realized they had the same artistic vision.

“We were coming from same place,” recalls Mekonnen, now based in Boston. “You can only have that kind of conversation when you find an equal, someone who’s headed in the same direction as an artist.”

This direction encompasses the vast resources of Ethiopia’s long-thriving, highly creative pop, jazz, rock, funk, and roots scenes, the music profiled on the Ethiopiques series and long treasured by music fans across the diaspora. Debo Band has turned not only to funk icons like Mahmoud Ahmed, but also to lesser-known ensembles like the Haile Selassie Theater Orchestra, a swinging big band with creative instrumentation, a broad sonic palette, and an Armenian maestro. 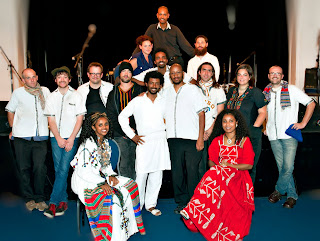 Ethiopia’s lively, cosmopolitan scenes didn’t fade with African artists’ interest in jazz, James Brown, or the sounds of rock psychedelia. They survived famine and war. Many talented musicians came back to Addis Ababa from around the globe in the 1990s and 2000s. Returnee artists like arranger and Debo Band inspiration Abegaz Shiota began forging a new Ethiopian sound and energy. One that Mekonnen and Debo Band felt intimately as they played around Addis Ababa, and one that the group transmits beautifully to American audiences.

“Everyone in Debo Band and Fendika is coming to the table with their own energy and lending it to the performance,” Mekonnen muses. “Instead of analyzing and recreating these classic songs, we’re pulling out their energy and using it to create something new, including originals. Working Fendika, with dancers, makes this easy.”