on August 09, 2011
From a media release - not one but two InDigest readings this month: 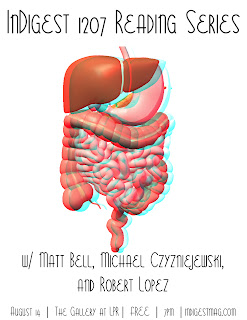 
10 Reasons you should care:
1. Matt Bell and Michael Czyzniejewski are both awesome novelists who are not from New York and you wouldn't want to have missed something this awesome.
2. Matt Bell is the editor of Collagist (lit mag from Dzanc) and the author of the incredible How They Were Found.
3. Robert Lopez is one of the coolest and strangest young writers in NYC.
4. All three of the readers on the 14th know each other from long time ago, so this is going to be like a party and you're invited.
5. The reading on August 17 actually is a party. We're celebrating the August 1st publication of Issue #21 of InDigest, which will features contributions from Richard Buckner, Beirut's Zach Condon, and tons of other great narrative writers, poets, and InDigest columnists. 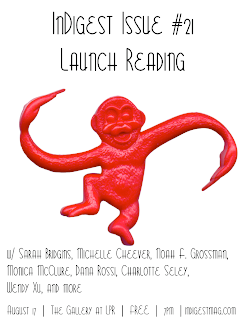 6. The InDigest issue launch parties are always fun. Lots of people, lots of drinks from The Gallery at LPR, happy hour....it's generally a barrel of monkeys. (See what I did there?)
7. Do you see the awesome line-up of contributors for the Launch Party? Awesome.
8. One of the fliers is in 3D. (For real, put on the glasses that are in your desk drawer. I know about them. I promise not to tell anyone you kept those. Whoa. It is 3D, right? Just like the reading, which will also be in 3D.)
9. It makes you feel really smart to know who these authors are, right? Because you know. Right?
10. Because it's August and you're brain is feeling a little fried from time spent at loud outdoor concerts, lying on the beach drinking Coronas, and taking day trips to fancy shoreside towns...and a little mental stimulation couldn't hurt at the end of the summer. (It won't be too stimulating. I promise.)