Don’t get Guarco wrong: he’s crashing on the couch to plot a revolution. He’s seen the world end in a carnival flourish, and watched life continue despite it all. He may wink at The Pixies, Lee “Scratch” Perry, and 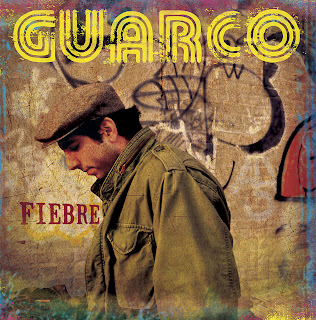 Caetano Veloso, but his heart beats with Afro-Uruguayan Candombe.

The Brooklyn-based singer-songwriter’s long-simmering debut Fiebre (“Fever,” guarco.net; August 9, 2011) bursts with these tensions. It moves frenetically between pissed-off revolutionary and blasé hipster, between worldly sarcasm and magical realism, between Spanish and English. It shakes, questions, and burns, with help from producer, engineer, and friend Ben Kane (D’Angelo, The Roots, Blitz the Ambassador).

Fiebre will be offered via Guarco’s Facebook band page to fans, the first use of the social networking platform’s apps for independent commercial music distribution. (The app is being built specifically for this project.) As part of this innovative use of Facebook, purchasers will be able to name their price for the album. This distribution approach will make the music accessible to all, and puts its value in the hands of the listener.