The heat coming from the Westjet Stage rivaled the steamy weather last night at Harbourfront, where I caught the last two acts of the evening. 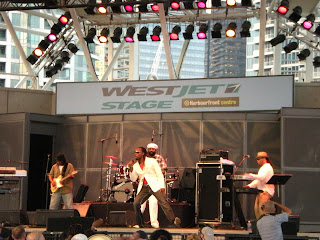 Of special note is the fact that local Toronto reggae band Hard Core backed up both of these artists. They're a really tight group and very talented - something Mutabaruka remarked on himself. It was the first time he'd performed without his own Jamaican band and when he said they were bad, you had to believe it. (He didn't strike me as one to say pleasantries to make people feel good, he he.)

Evin Lake (aka Kevin Clarke) comes from a long line of reggae singers, and while this was his Canadian debut, he's been active in the industry since 1990. He's a great vocalist, and made his living for more than a decade in the clubs and tourist resorts along the north coast of Jamaica, in Ocho Rios, Montego Bay and Negril.

He said more than once that he loves to sing to the ladies - and they loved him right back. He's recently returned to the recording studio, emerging with a hit back home with a cover of Teddy Pendergrass' Come Go With Me that's getting huge airplay in Jamaica. Easy to see why.

Mutabaruka takes over the stage like a tornado, always on the move, always on the mic whether he's performing one of his poems or expounding on all that's wrong with our world. His take no prisoners approach doesn't cater to anyone's sensibilities - at one point, he joked about never being asked back - including shots at organized religion, the junk food industry, cigarettes, drugs and patriarchal culture, among others. He marries direct speech with intelligent wit and a rapidfire delivery that leaves you thinking long after he's stopped talking. The crowd was huge.

Here's a snippet of him performing his classic De System: