Open Air Theatre in Toronto: Hansel and Gretel - A Case Study at Ward's Island to August 14

Shadowland Theatre presents
HANSEL AND GRETEL - A CASE STUDY
A radical new take on an old tale.
continues to August 14, 2011

Toronto - The acclaimed Shadowland Theatre returns to the Toronto Islands with an outdoor, all-ages, processional cabaret performance of Hansel and Gretel - A Case Study, a darkly humorous take on the 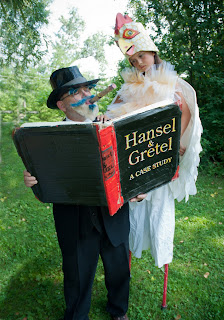 legendary coming-of-age German fairy tale from the Grimm Brothers. Hansel and Gretel - A Case Study weaves through Ward's Island August 9 to August 14, taking audiences into the deep, dark forests of their imagination.

Combining live music from Brecht and Weill's The Threepenny Opera, Shadowland's theatre of spectacle, song and site-specific performance reveals the deeper meaning in the Hansel and Gretel rite of passage tale - with the help of none other than Sigmund Freud for a triple deutsch black forest treat!

Hansel and Gretel is a beloved children's story (albeit filled with some dodgy themes!). Hansel and Gretel - A Case Study is a true family show: youngsters fly the coop, are exiled into the deep, dark woods and forced to grow up; adults struggle for survival, and the voracious forces of temptation and excess vie with those of hunger and desperation.

In the slyly subversive Hansel and Gretel - A Case Study, a poultry farming family, living close to the edge, get rid of their children (they are so draining on resources) after a scourge hits the land and the Ministry, cautious of contamination and contagion, closes down their operation, leaving the family destitute. Our fledgling heroes begin a life-changing journey that takes them into the clutches of preying adults and forces their parents into low-paying, dead-end jobs. Driven far from home, the children's hunger causes them to have hallucinogenic dreams from which they awaken to become entranced by a most welcoming foxy lady. Her entrepreneurial spirit has created a niche industry combining sweet temptations with the catchphrase, "I love cooking with children." 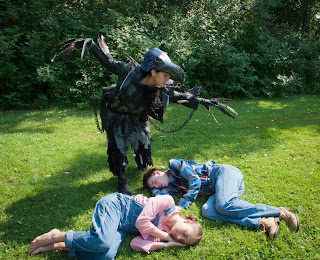 This is all observed by an ominous Raven, a transformative trickster who houses a secret. Hansel and Gretel are at their wits end but the ingenuity of their youth ultimately allows them to overcome all obstacles and unlock the mystery.  They find the treasure that is their independence, allowing them to move towards adulthood. All of this is accompanied by the insights of Freud's case studies.

With creatively masked characters, shadow puppetry, music, song, 15 stilt-dancing children and wild, visual humour, Shadowland casts a light on the façade of our sugar-coated civilization and reveals that it is only as thick as a gingerbread wall. At the finale, when the truth comes out and the adults get their just desserts, the audience is guided back to Ward's Island ferry dock with a celebratory parade for their return from their summer night's odyssey to the city, which they will assuredly see in a new light. 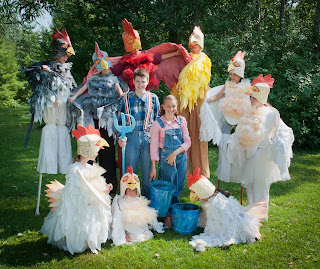 Shadowland Theatre presents Hansel and Gretel - A Case Study at WARD'S ISLAND
continues to Sunday, August 14 at 8pm
TICKETS: $15 ($10 children) (FAMILY RATE: $40)
Suitable for all ages. Show begins at the Ferry Docks on Ward's Island.
Take the Ward's Island Ferry at 7.45pm (or earlier) from city docks at Bay & Queen's Quay
For reservations and information, call 416-203-0946 or visit www.shadowlandtheatre.ca