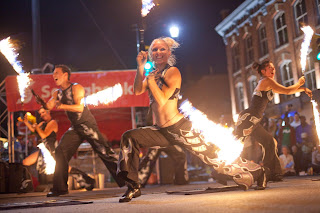 Lawrence Market neighbourhood once again as buskers from all over the world take over the streets from Thursday, August 25 to Sunday, August 28.

Prepare to be amazed by some of the most unique pogo-sticking, hula-hooping, fire-breathing, artistic juggling, body-contorting, whip-cracking, plate-spinning, unicycle-lassoing performers in the world. Named for the fourth time as one of Ontario's top 100 festivals and events by Festivals and Events Ontario, Scotiabank BuskerFest promises four days and nights of spectacular entertainment in support of Epilepsy Toronto.

Last year's Scotiabank BuskerFest attracted over 1 million spectators of all ages and this year promises to be even bigger, with over 100 of the best street performers from Argentina, Australia, Canada, Denmark, Ireland, Japan, Mexico, the Netherlands, Spain, Sweden, the United Kingdom, and the United States participating in the Festival.

Making their first-ever appearance at the Scotiabank BuskerFest are the following NEW ACTS:
• From Denmark: World-class, internationally renowned clown, comic and acrobat Mr. Toons, aka The Professional Idiot, unicycles, juggles, and squeezes his body into a giant helium balloon in this wonderfully madcap act! A huge hit at festivals and on TV screens across the globe.

• From the UK: The legendary Gazzo has been mixing comedy, magic and British charm for over 30 years into a must-see show. Most famous for his cups and balls routine, Gazzo has turned a classic magic effect into a hilarious, magnificent, gut-busting show.
• From the U.S.: Leapin' Louie Lichtenstein, aka The Roping Fool, is the most explosive Lithuanian Jewish cowboy comedian to ever come out of Oregon. The eccentric Leapin' Louis combines physical comedy, improvisation, world-class lasso and whip tricks and other surprises.
• From Canada: Alberta's chair-juggling duo The Chairmen  offer a truly chair-raising experience, while A Billy Kidd  brings to magic what most magicians can't... a female twist. She is one of the few female magicians in the world and the first ever at this festival.
• From Mexico:  Acrobat Pancho Libre  astounds audiences with his mind-boggling feats; circus, fire, martial arts and a high-flying human flag! 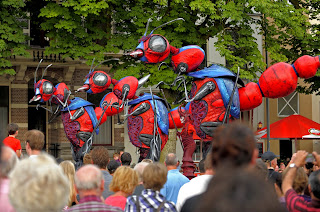 • From Japan: High energy acrobatic and juggling antics along with mime and magic happenings are Yoshi's  forte. During this difficult time for Japan, Yoshi will make his way half way around the world in honour of his people and his craft.

Admission to Scotiabank BuskerFest is by voluntary donation to Epilepsy Toronto, a non-profit organization dedicated to helping more than 40,000 Torontonians with epilepsy, and their families, through counselling, employment support, advocacy and education.

Buskers retain proceeds from "the hat" passed after their performances except for two special group benefit shows where proceeds go to Epilepsy Toronto: the 6th Annual Fire Show showcases the 'hottest' fire performers at the fest (Fri. August 26 at 9:30pm - rain date August 27), and the Grande Finale (August 28 at 6:30pm) where the winner of the Metro's People's Choice Award will be announced.

"Scotiabank BuskerFest brings together healthcare and the arts - two important pillars of our philanthropic program, Scotiabank Bright Future," said John Doig, Senior Vice President, Toronto Region, Scotiabank. "We are proud to support this family fun festival that also provides much needed support for Epilepsy Toronto. We have a tremendous lineup of new performers this year and are all very excited to see these exciting new acts."

Images:
• Australia's FlameOz returns to Scotiabank BuskerFest for the second year in a row. The dynamic fusion of fire manipulation, dance, acrobatics, martial arts and circus captivates audiences of all ages.
• CloseAct: Dutch circus troupe Close Act returns to Scotiabank BuskerFest with a new act,XL-INSECTS, a larger- than- life spectacle of visual theatre that towers above the crowds as they swarm through the streets!